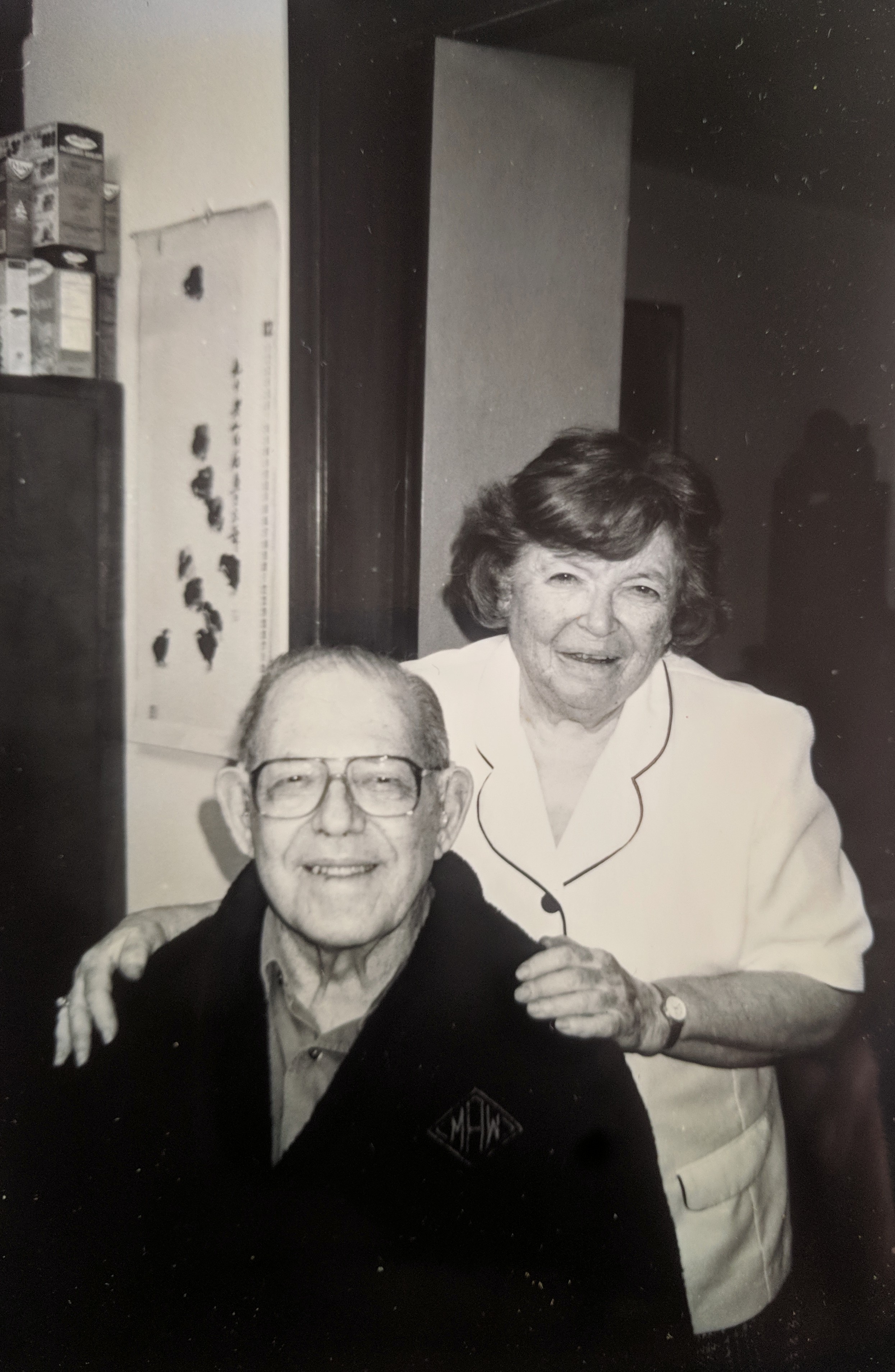 Bernice Antoville (“Bunny”) Kaplan, professor emerita of anthropology at Wayne State University in Detroit, Michigan, died at home on October 10, 2020, in her 98th year. Born April 21, 1923, in New York City to Marie (“Manya”) Antoville Kaplan and Meyer (“Kappy”) Kaplan, Bunny was an only child whose childhood, adolescence, and youth were marked by times of the Great Depression and World War II. Like many NYC children of the era, she vividly remembered schools in which desks were shared, and school days were split to reduce crowding. In view of her superior academic achievements -- and due to the endemic school overcrowding of the times -- she was promoted academically (skipped grades) twice, and graduated from high school in her mid-teens.

She matriculated at the then all-female Hunter College and was initially headed for a career in social work. However, after some experiences dealing with social work clients, she began to feel that the field was too prescriptive: it tended to tell people how they should live.

She was interested in learning how people from different backgrounds were living and chose -- or were led by their own indigenous cultures -- to lead their lives. She began to work at the American Museum of Natural History, first as a volunteer while an undergraduate, then on a full-time basis while pursuing post-baccalaureate studies at Columbia. At the museum, she worked with luminaries such as Franz Weidenreich and met Margaret Mead.

Some time later, she applied to and was admitted to graduate school at the University of Chicago, where she studied initially with Robert Redfield and later knew Sol Tax, completing her Master’s in anthropology in 1947 and her Ph.D. in 1953. Her doctoral committee initially demanded changes to her dissertation, which she -- somewhat ruefully -- undertook. When the committee members asked for a second round of revisions (in several cases contradicting each other with their demands), she grew frustrated and demurred.

She told them that her dissertation would stand as it was and that she would stand beside it (they approved awarding her the Ph.D.). In later years, speaking about her own doctoral advisees, she noted that when a Ph.D. candidate is willing to defend the dissertation she/he has written, then they are ready to receive their degree.

During the course of her (by then) advanced studies, she met Gabriel Lasker, another anthropologist (although one who focused on physical anthropology, rather than on cultural anthropology as she did). In 1946 he was offered -- and accepted -- a job teaching gross anatomy in the medical school at Wayne State University in Detroit, Michigan, and they married in 1949. During non-academic sessions (primarily summers) they conducted ongoing research (beginning in April 1948) in the then-small town of Paracho, Michoacán, Mexico, developing contacts with prominent people in the community who provided anthropological information and further community connections that helped advance both his measurement-based physical studies and her cultural and ethnographic inquiries.

The early years in Detroit were not particularly easy. Wayne State at the time had an “anti-nepotism” employment policy that did not allow married couples both to hold jobs within the university -- even if in entirely different schools and/or departments. Nonetheless, the couple decided to start a family, with children born in 1955, 1957, and 1960. To continue on her career path, Bunny often was forced to take teaching jobs (generally, part-time) at institutions as far away from Detroit as East Lansing. However, when WSU administrators learned that the University of Michigan was about to make an offer to hire her, they “decided” that, since the School of Medicine and the College of Liberal Arts were separate entities within the University, the anti-nepotism policies needn’t apply.

Subsequently (and in relatively short order), she was offered a job at Wayne. Before long years had passed, Bunny was able to “get her foot in the door” at Wayne’s (then) Department of Sociology and Anthropology. Once she got on the tenure track as an assistant professor the “sailing” became somewhat smoother. At the time of her retirement (as a full professor) around 2000, she had served on the advisory committee of over 75% of all the Anthropology Ph.D.s that WSU had awarded.

Bunny had a small but pivotal role in the integration of Atlanta’s hotel and convention industry in 1954 before the civil rights movement had succeeded in integrating hotels, restaurants, and other public accommodations across the South. She convinced her husband, then secretary of the Anthropology Section of the American Association for the Advancement of Science (AAAS), that he shouldn’t organize the Anthropology program -- or even attend the AAAS annual meeting -- slated that year to be held in segregated hotels in Atlanta. He wrote to the organization’s executive director that some members (at first just Bunny, but later many more) wouldn’t even attend a meeting where informal gatherings of all members would not be possible in the official hotels. Because of that, he said, he would not organize an Anthropological program.

To their mutual surprise, Margaret Mead, who was then on the Association’s Executive Board, refused to back them up. The Executive Board counter-proposed that the Anthropology Section should meet at Morehouse College, a historically black institution, where all the members could attend. Following the meeting, a resolution -- that the organization should never again meet in a location where each and every member would not be able to participate fully in both formal and informal activities -- was put to the entire AAAS membership. It passed decisively, as reported in the New York Times (and -- perhaps -- locally in Atlanta); soon thereafter, the hotels in Atlanta were integrated.

The couple took a sabbatical in summer 1957-58, traveling with their two young sons (the younger still in his infancy) to conduct further research in the community of Lambayeque, Peru. Both Americans & European ex-pats (and even some of the native Peruvians) thought they were eccentric -- if not a little bit “loco” -- to travel so far with such young children. While they did not disrespect other people’s opinions, they did not care so much for them as to be unduly influenced.

In 1960, Gabe was offered a one-year post at the University of California in Berkeley, working on editing some critical documents (he was by then an experienced editor of various anthropological journals and other papers). By the time they returned to Michigan following their year in the San Francisco Bay area, their three-child family was fully formed. As was common practice at the time, Bunny bore the principal responsibility for child-rearing and household management in addition to her academic and teaching responsibilities. In later years (after her children were “fully grown”) she enjoyed more freedom, and conducted research on the health care experiences of Pakistani immigrants (and second/third generation Pakistani families) in London, England, in addition to pursuing other interests, both academic and otherwise.

At some point after 50+ years of teaching anthropology -- she was never quite sure how the university determined exactly when her employment had begun -- WSU commemorated her meritorious professorial career with the very rare (especially in academic departments) 50 year service award. By then, she had spent many years in the WSU Academic Senate (formerly the Faculty Council) and its Curriculum and Instruction Committee, as well as working on other departmental, college-wide, and university concerns.

Bunny also was a life-long peace activist (and a member of peace-based organizations such as the Women’s International League for Peace and Freedom and the War Resister’s League) as well as a civil rights advocate who later served on the Michigan board of the Anti-Defamation League. As such, she was one of the core campus supporters of WSU’s Center for Peace and Conflict Studies (CPCS) under its founding director, Lillian Genser. In April 2017 CPCS gave her a special recognition -- along with several other activists -- in a ceremony honoring key contributors to its cause.

Her remarks on that occasion noted the following: “Coming of age in the era of Hitler’s (& Stalin’s) rise to power, I was -- of course -- horrified by the events engulfing the so-called “Old World.” It seemed to me almost inconceivable, however, that military actions could (or would) somehow resolve the situation then engulfing Europe and threatening the entire planet. Learning about the horrors of that time -- many made fully public only after the war ended -- did nothing to change my mind . . .

“ . . . in a world in which conflict is (or seems, at any rate) unavoidable, we must remember--and act upon--our conviction that war and violence resolves nothing. Instead, it is talking through, thinking about, and imagining ourselves ‘in the other person’s shoes’ before we try to bring our negotiations to a successful conclusion that works best in conflict resolution.

“In terms that even a businessman with a rather short attention span just might be able to understand, “The Art of the Deal” in terms of politics and diplomacy is not a zero sum game that is all about winning. Instead, it’s about finding common ground, seeking mutually agreeable -- if imperfect -- compromises, and (eventually) “Getting to ‘Yes’.”

Bunny Kaplan is survived by her children: Robert Lasker of Beverly Hills, Michigan, Edward (“Ted”) Lasker of Farmington Hills, Michigan, and Anne Lasker of Grand Rapids, Michigan, as well as by her grandson, Wilson Eduardo Beltran Lasker, currently living and working in Tokyo, Japan. She is also survived by most of her nearly innumerable students and many colleagues. She was predeceased by her beloved husband, Gabriel Ward Lasker (1912-2002).