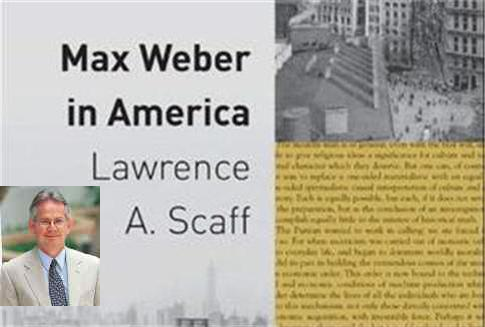 Dr. Lawrence Scaff, Professor of Political Science, received the 2012 Distinguished Scholarly Publication Award for his recent book, Max Weber in America (Princeton University Press, 2011). Dr. Scaff is recognized as one of the preeminent scholars in the world who interprets Weber's work. The award is presented by the History of Sociology section of the American Sociological Association for the outstanding work of the year. Max Weber, widely considered a founder of sociology and the modern social sciences, visited the United States in 1904. The study provides new details about Weber's visit to the United States--what he did, what he saw, whom he met and why, and how these experiences profoundly influenced Weber's thought on immigration, capitalism, science and culture, Romanticism, race, diversity, Protestantism, and modernity. Dr. Scaff traces Weber's impact on the development of the social sciences in the United States following his death in 1920, examining how Weber's ideas were interpreted, translated, and disseminated by American scholars such as Talcott Parsons and Frank Knight, and how the Weberian canon, codified in America, was reintroduced into Europe after World War II. The work has received international acclaim, as exemplified by the statements of Kieran Flanagan (Canadian Journal of Sociology) "given its scale, the uniqueness of its insights and the relentless industry displayed, this is a work of scholarship which is most unlikely to be superseded" and John G. Gunnell (Journal of American History) "a prodigious amount of archival research tracing Weber's path through the United States, it is difficult to conceive of what would comprise a more definitive examination of this period in Weber's life and work."