Jahnavi Narkar has been fascinated by language for as long as she can remember. A master’s student in linguistics at Wayne State University, she took an unconventional path to get here.

“I grew up in the '90s in India, where economic uncertainty meant the only skills worth pursuing were those that foreign investors deemed employable,” Narkar says. “I received bachelor’s and master’s degrees in the highly employable field of engineering, but it did not stimulate my intellectual curiosity the way language and linguistics did.” 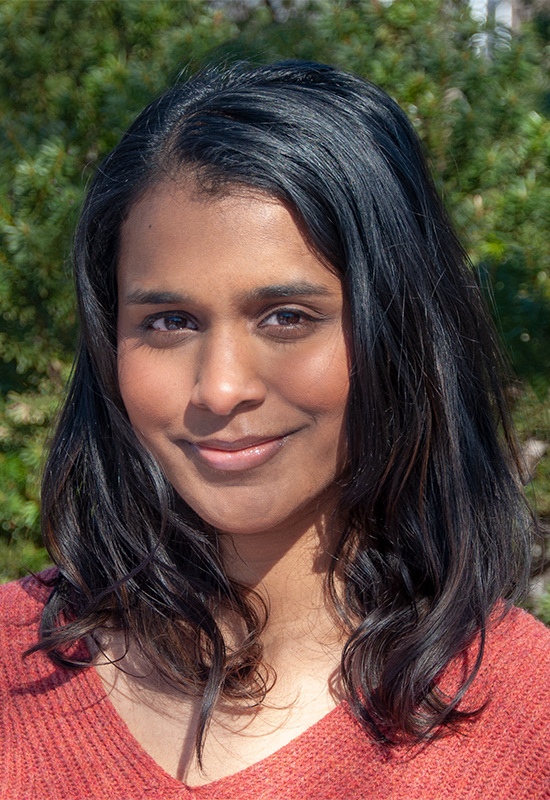 In 2014, she came to the U.S. to earn that master’s in engineering at Purdue University and took linguistics courses on the side. After graduation, she moved to Detroit to work as an engineer at an automotive company but felt a niggling lack of purpose—a concern that she shared years later with one of her former linguistics professors at Purdue, who encouraged her to pursue her passion. That conversation uprooted Narkar’s career path, and, in 2017, she applied and was accepted into the linguistics program at Wayne State.

“I initially enrolled part-time but immediately fell in love with the faculty and the student community and discovered many opportunities for academic development and research.”

She quit her job to study linguistics. Interested in phonetics, or the sounds of human speech, she studies how the physical properties of sounds impact how they are perceived by listeners.

Narkar put her research to work by taking part in a national training program in linguistic fieldwork this past summer, funded by a grant from the Documenting Endangered Language Program of the National Science Foundation (NSF). During the extensive application process, Narkar cited her interest in Indonesian languages, “given the incredible linguistic diversity found there.” NSF chose her placement: an island in the Flores Regency of Indonesia, where she was paired with two Indonesian undergraduate students to study an endangered language called Adonara.

“I was paired with Fransiska, who spoke Adonara natively, and Darius, who spoke a related dialect.”

Their destination? The village Karing-Lamalouk on Adonara Island, where they stayed with Fransiska’s brother, Valentinus, who was the “dusun” (chief) for that sector of the village.

Before recording, the research team met the chief of the entire village to ask permission to conduct the study (a civil gesture, he’d known they were coming). The chief introduced them to willing participants, “but we mostly found speakers walking around the village and talking to people,” Narkar says. “We told them what we were there for and requested them to tell us stories in their native language, sing a song or just have a conversation with a friend that we could record. Most people were happy to talk to us.”

The interviews began in speakers’ homes, but the recording equipment kept picking up the sounds of the village: chatting neighbors, crowing roosters and barking dogs.

“So, we started recording people in the thick woods where it was very quiet and still.”

The first person recorded was the oldest at 95 years, affectionately called Mama Lipat by the locals. The only monolingual speaker in the village, “she had the heartiest laugh and told us many delightful stories,” Narkar says.

She says the villagers consider themselves farmers, though not in the way Americans think of farming. Fishermen bring their catch up into the mountains to sell while others raise livestock, claim swaths of jungle and harvest the fruits that grow there. The local school provides education up until 12th grade, but she says most drop out sooner to work.

“Fransiska and Valentinus were the only people in the village who had a college education,” Narkar says. “Unfortunately, one of the first Adonara words I learned was the word for ‘suffering’ because so many people would use it when talking about themselves. In spite of this, the community is very progressive.”

The villagers took pride in a local LGBTQ alliance, a leader of the local catholic youth group identifies as queer, and Narkar says
many speakers made a point to tell the research team that genders are respected equally in the village.

The team didn’t only record conversations but songs and dance, too.

“I was the first foreigner to visit the village of Karing-Lamalouk,” Narkar says, “so they organized an evening featuring traditional songs and dances. I wore traditional Adonara clothes and got to participate in the dance which I was very bad at but enjoyed thoroughly.”

She laments that the improvised song and dance form, Soley, is itself a dying art form.

Narkar says languages changing and even being lost is widely considered a natural process but it’s not one that happens without inequality. Language is often a casualty of colonization, and with it, culture.

“In the case of Adonara, speaking Indonesian as the first language offers economic incentives in the form of access to better jobs, the ability to travel to the rest of the country and the luxury of not being subjected to discrimination on the basis of language.”

It’s a power dynamic with which Narkar herself is familiar.

Her hope is that the research conducted in Karing-Lamalouk will inform linguists and contribute to revitalization efforts to preserve the Adonara language.

She plans to return to Adonara Island very soon.

“Going through this data, I have found a very interesting and unexpected group of sounds in Adonara. I plan to return after I have understood my existing data well with a more specific, well-formulated research question.”

With her sights on a career in academia, Narkar aims to earn a Ph.D. after completing her master’s so that she might teach and inspire a future class of aspiring linguists.