Precedent? Nah, the Senate gets to reinvent its rules in every impeachment

Everybody seems to be using the word “precedent” right now.

Commentators, the media and even Senate Majority Leader Mitch McConnell use it when they discuss or debate the appropriate procedures for President Donald Trump’s impeachment trial.

The word has multiple meanings, though, so what people mean by “precedent” is often unclear and confusing.

Binding or just a guide

The word “precedent” has a technical legal meaning and a common one.

Legally, it is a term of art that refers to a rule established in a court case. That rule is either binding or persuasive for other courts in deciding later cases with similar issues or facts.

Simply put, legal precedents obligate courts to follow the same rule and often determine the outcome in a similar case.

In common parlance, however, precedent has a different meaning.

In this use, it refers to an earlier event or action that is regarded as an example or guide to be considered in similar circumstances. This kind of precedent is nonbinding and merely instructive. 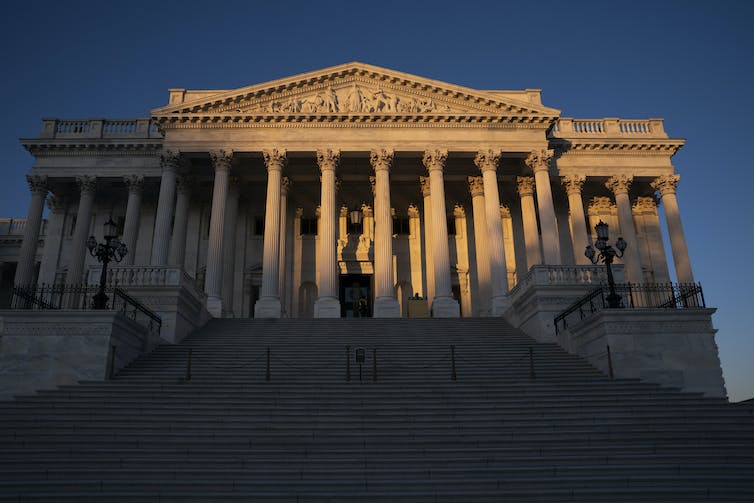 The sun rises over the Senate on the first day of Trump’s impeachment hearing, Jan. 21, 2020. AP Photo/J. Scott Applewhite

When a trial doesn’t set precedent

Unlike a court of law, prior impeachment trials serve as precedent only in the nonlegal, nonbinding sense.

The Senate can look to the procedures it has used in past impeachment proceedings, but those procedures do not have to be followed.

The Constitution gives very little guidance on how an impeachment trial should proceed. Article I, Section 3, Clause 6 states, “The Senate shall have the sole Power to try all Impeachments.”

After requiring that Senators be “on oath,” that the chief justice preside and that a two-thirds vote is required to convict, the Constitution leaves it to the Senate to make its own rules about how to conduct the trial.

The Supreme Court held that courts cannot review the procedures used by the Senate in trying impeachments because the framers gave the authority to try impeachments to the Senate – not the courts. In short, the Senate gets to decide its procedures.

The Senate followed different procedures in the presidential impeachment trials of Andrew Johnson and Bill Clinton.
Nothing says that they have to follow either of those past procedures now, which is why the Senate recently approved new rules to govern the impeachment trial of President Trump.

In adopting these rules, the Senate left the questions of admitting new evidence and witnesses unresolved. So the fight over procedures and precedents may not be over yet, especially since the Senate can change the rules by majority vote whenever it wants.

[ You’re smart and curious about the world. So are The Conversation’s authors and editors. You can read us daily by subscribing to our newsletter. ]