🦅 Viewers can monitor the falcons 24 hours a day at go.wayne.edu/falcons

It’s not unusual to hear a piercing screech from the skies over Wayne State's Old Main. Passersby can be seen craning their necks to see what the commotion is. Perhaps more morbidly, they may have even stumbled across the remains of that clamor — bits and pieces of decimated birds strewn across the lawn.

The culprits of the chaos are Isabella and Freedom, Wayne State’s resident peregrine falcons. The pair have called WSU’s iconic clocktower home for the last several years. Now, thanks to a few generous supporters, the Department of Biological Sciences and the College of Liberal Arts and Sciences (CLAS), a new webcam near the nesting site will allow researchers and the public alike to monitor these fascinating birds of prey.

According to the color-coded ID bands placed around their legs when they were chicks, Isabella and Freedom are from Bedford, Kentucky, and Jackson, Michigan, respectively.

Peregrines, which are the fastest animals on earth — sometimes diving 240 miles per hour to catch prey — have been known to travel hundreds of miles to find mates. Once mated, most peregrines remain monogamous for life and nest in the same territory for years.

Isabella and Freedom have produced at least nine chicks — officially called “eyases” — since 2016, according to VanStratt.

After the birds mate in late-February, the eggs typically hatch in April. The chicks can be seen fledging the nest in June and will stick around the site for most of the summer.

One of the Falcon Cam's supporters is Michelle Serreyn, a two-time CLAS alumna and lab coordinator in the biology department. Perhaps the birds’ biggest on-campus champion, she has spent hours observing the pair.

Serreyn has a prime view of the nesting site from WSU's rooftop greenhouse across the street. Last summer, she got a front-row seat when the fledglings chose to have an afternoon snack on a greenhouse ledge. “They were ripping a pigeon apart just yards away from us,” she enthusiastically recalls.

Students walking to class in Old Main can be seen zig-zagging to avoid the falcons’ leftovers — passing birds that unwittingly became the couple’s lunch. To Serreyn, these parts are much more than refuse. She is licensed to collect and store the carcasses in the biology department's Museum of Natural History. Each piece is an indication of the health and vitality of migratory bird populations.

From locals like pigeons and Blue Jays to the rarer Great Crested Flycatcher, Serreyn has collected dozens of feathered remains. “Each carcass tells us about the migratory patterns of passing birds,” she says.

Serreyn has worked with Detroit Audubon and Michigan’s DNR to help monitor the falcons, but a lack of resources means that Isabella and Freedom's offspring — typically three or four chicks per year — have never been tagged or tracked.

With this new video stream, WSU researchers will now be able to collect and share data on the whole brood, year after year.

“This camera is going to be our eyes and ears when it comes to keeping tabs on the peregrines," Serreyn says. “Not only to monitor their behavior, but if something happens to one of the chicks, if one of them gets sick, now we’ll be able to help.”

What’s more, anyone with an internet connection can watch the birds, day or night, and assist with data collection. Whether it’s hatching eggs or fledging chicks, Serreyn encourages “citizen scientists” to let her know when they see something interesting by using the hashtag #WSUFalcons on Twitter.

“The more data we have, the better we can understand what’s happening with this species,” says Serreyn. “It will be particularly interesting since this isn’t their native environment.”

Campus visitors who spot the aforementioned “leftovers” near Old Main can also post a photo using the hashtag to help with data collection — all for science.

The Department of Biological Sciences plans to develop community programming around the pair in the near future.

"We hope this inspires students and the rest of the community to get involved with the natural world around them or even inspire them to help another endangered species," Serreyn says. “We're not going to make this world a better place without all of us working together. If it’s this one charismatic animal that inspires someone, it will all be worth it.” 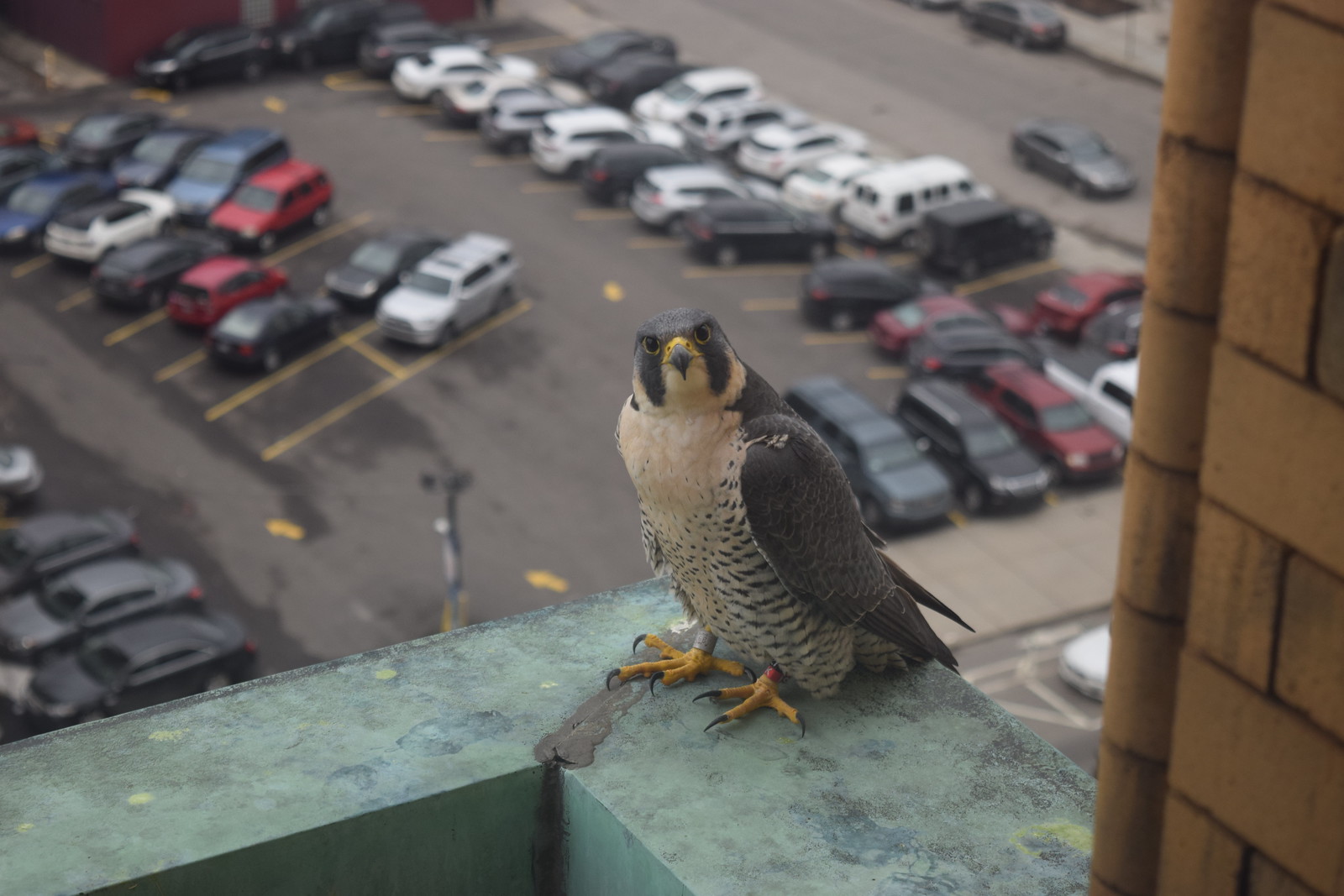