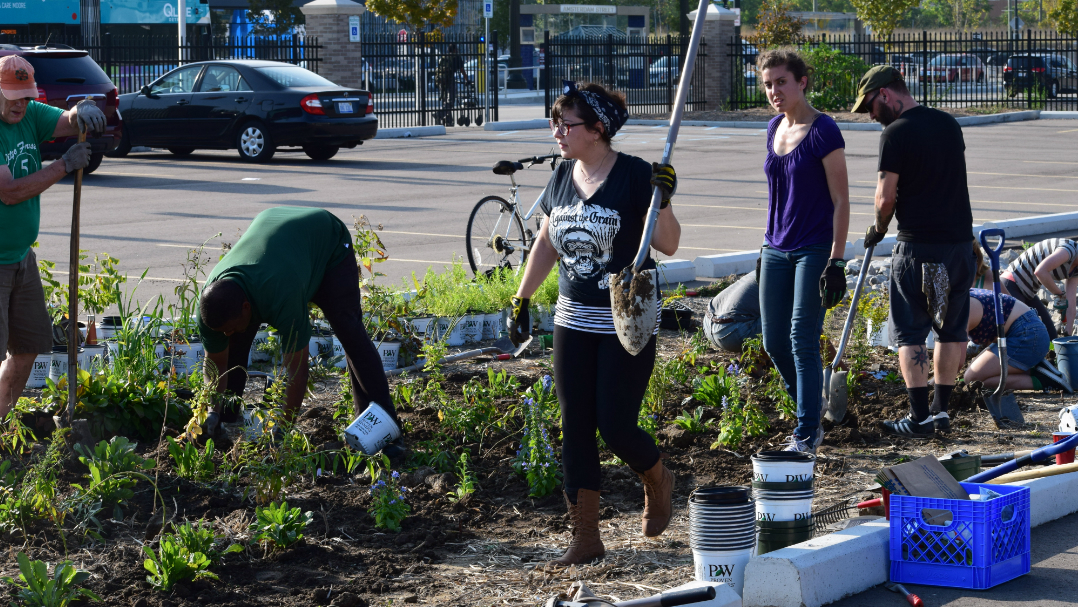 The Detroit Biodiversity Network (DBN) a student organization at Wayne State University has taken a step in helping the city go green. Together with several community institutions, they have built a bioswale in the parking lot outside of the university's Integrative Biosciences (iBio) Center.

A bioswale is a manmade landscape element designed to take in rain runoff from city streets or structures and filter out pollutants before the water can make its way to the drain system. It also doubles as a potential urban habitat for bees and butterflies.

Plans to build the bioswale began as early as February, when the DBN began cultivating native plants in the Science Hall greenhouse the decision to use regional flora was made so the bioswale could withstand the unpredictable Michigan weather. They worked closely with Daryl Pierson, leader of the Office of Campus Sustainability, to identify potential sites for the project and rally volunteers. When the time came for building on Sept. 21, the DBN had grown around 200 plants and secured help from the Sierra Club, Friends of the Rouge, and Rain Gardens to the Rescue.

"We had about 20 amazing volunteers come out to help with the initial planting of the bioswale," says Natalie Lyon, co-founder and treasurer of the DBN. "About half of those were students, with majors ranging from environmental science, geology, and engineering, to English, biology, and urban planning."

The bioswale has largely been completed, but over the course of the next few weeks it will be undergoing additional planting and maintenance to ensure it reaches its greatest potential.

The DBN is dedicated to engaging students in hands-on projects that improve the sustainability of WSU's campus and the surrounding Detroit communities. Those interested in learning more about bioswales and similar projectsor seeking to volunteerare encouraged to visit them during their greenhouse open hours: Wednesdays at 6:30 p.m. on the fourth floor of the Science Hall, or contact them at detroitbiodiversitynetwork@gmail.com.