After months of summer research, a group of Wayne State undergraduate students presented their findings at one of WSU's first in-person events of the year, the annual Richard Barber Interdisciplinary Research Fair. This hybrid event gave students the opportunity to present their work either in-person or virtually.

The fair was the culmination of the Richard Barber Interdisciplinary Research Program. The program gives students experience researching a topic of their choice alongside Wayne State faculty. This project allows students to gain experience working in a lab and with other professionals across the university.

This program was made possible with the support of WSU alumnus Richard Barber, CLAS ’53, Law ’55, and Chris Kelly, assistant physics professor and the program’s director.

While the program is primarily a summer project, some of the students will go on to present their findings at other academic conferences throughout the year. Every student selected a topic of research they felt passionate about and dived in to gain as many findings as possible. 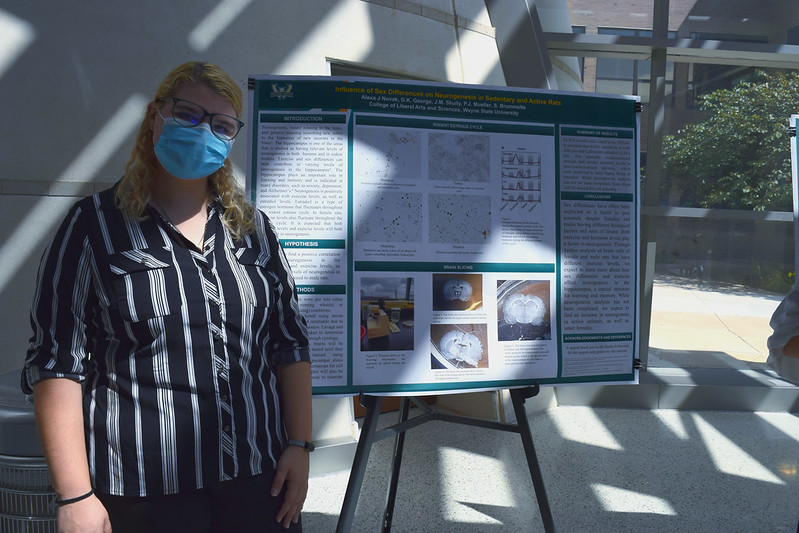 Psychology student Alexa Novak wanted to research sex differences in neurogenesis on sedentary and active rats. Novak defined neurogenesis as the formation of new neurons in the brain. Neurogenesis is often found in the brain’s hippocampus, which is the area responsible for learning and memory, and is indicated in neurological disorders such as Alzheimer’s and anxiety.

“We know from previous research that estradiol, or estrogen, which is a female sex hormone, increases neurogenesis; exercise is known to increase neurogenesis as well,” said Novak.

Novak focused her research on both sedentary and active male and female rats to get the best cross-comparison. To get accurate results, Novak and her team looked at cells under a microscope from different stages of the estrous cycle and brain slicing to look for neurogenesis that shows those new cells. Novak said that her research is still ongoing, but her team speculates that active female rats will have high rates of neurogenesis.

Biomedical engineering student Sidharth Veluthakkal aimed his research on discovering alternative elements that can be used as magnets. This research is a cross between physics and engineering, which is what makes his project unique.

Veluthakkal said that China is currently monopolizing the market for rare earth elements used for many modern-day applications such as cars, computer chips and mobile phones. Considering that, he wanted to research other elements and materials that can be alternatives to the monopolized elements. Veluthakkal explained that while there haven't been any discoveries for other options yet, there have been instances where elements have come close to being as strong.

Veluthakkal’s research aims to create ferromagnets with a magnetic moment, or strength, above 100 to surpass the strength of the rare earth elements. Hence, people have alternatives to the monopolized elements.

The entire project revolves around the treatment of pellets; Veluthakkal and his team prepared samples of three materials: iron, nickel, and cobalt. This process involved drying the wet powders by putting them in a furnace at 50 degrees Celsius for 30 minutes and then sun drying the rest as backups.

They were then added to a vacuum desiccator to remove any remaining moisture, then turned into pellets to diffuse the elements and create a new phase. He believed this combination will inherent magnetic properties more powerful than rare earth elements.

“We found out that the argon element is better because they are more tightly held together, which is important because later on we are going to polish these samples, and it has to be able to withstand the pressure of polishing without breaking,” said Veluthakkal.

Veluthakkal explained that the delivery of elements took two months to arrive, which delayed his research process, and he only had one month to do the actual experiments, which is just one of the obstacles of doing research and said that it was a good learning experience for what happens in the world of lab research. He felt inspired to continue the research because of the geopolitical issues that tie in with this research.