Can a Christian flag fly at city hall? The Supreme Court will have to decide 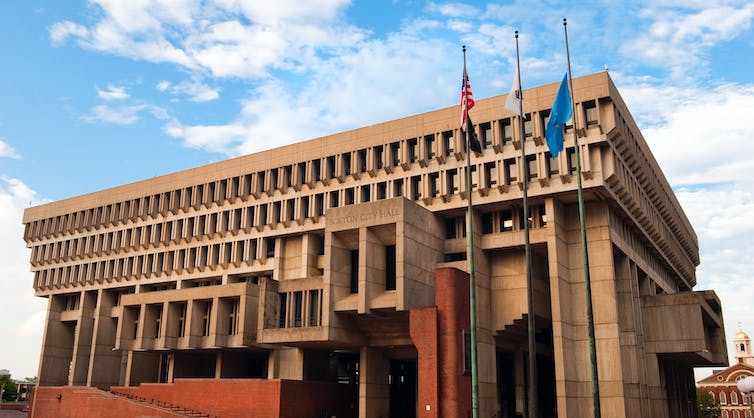 Organizations can apply to have their flag temporarily replace the Boston city flag, shown on far right, in front of City Hall. gregobagel/iStock via Getty Images Plus

There are three flagpoles outside Boston City Hall. One flies the United States flag. Another flies the Massachusetts state flag. What can – and can’t – fly from the third is an issue being taken up by the Supreme Court.

On Jan. 18, 2022, the Supreme Court will hear oral arguments in Shurtleff v. Boston. The case addresses whether the city violated the First Amendment by denying a request to temporarily raise the Christian flag on a flagpole outside City Hall, where Boston has temporarily displayed many secular organizations’ flags.

The case raises important questions about free speech at a time when many members of the Supreme Court seem concerned about restrictions on religion. The court’s decision will likely clarify one or more free speech doctrines, impacting how courts nationwide interpret the First Amendment’s guarantees.

Shurtleff v. Boston also highlights disagreements about the nature and scope of freedom of speech, the kind of disputes I study in my work on free speech and the First Amendment.

Boston permits groups to request that a flag temporarily fly alongside the American and Massachusetts flags at City Hall to mark special occasions, replacing the city flag that usually occupies the third post. Past examples include flag requests from the Chinese Progressive Association and the National Juneteenth Observance Foundation.

In 2017, Camp Constitution, a New Hampshire-based organization, requested to fly the Christian flag, which has a cross in the upper left corner and was designed by a Sunday school teacher and a missionary executive in the late 1800s. Today, some Protestant denominations display the flag inside their churches.

Camp Constitution asked to fly the flag as part of a planned event “to celebrate the civic contributions of Boston’s Christian community.” The organization says its mission is “to enhance understanding of our Judeo-Christian moral heritage, our American heritage of courage and ingenuity, including the genius of our United States Constitution, and the application of free enterprise.”

Boston denied the request. The city cited concerns that raising the Christian flag at Boston City Hall would violate the First Amendment’s establishment clause, which bars the government from promoting particular religions over others. After making a second request, which Boston also denied, Camp Constitution sued.

A federal district court and the First Circuit Court of Appeals sided with Boston on the grounds that flying a flag on the third flagpole was government speech, not private speech – and therefore the city was entitled to refuse to fly the Christian flag on its flagpole.

Camp Constitution appealed to the Supreme Court, which granted review.

The case’s outcome will likely hinge on the Supreme Court’s determination of whose views are represented by the flagpole outside City Hall: the private organization whose flag is temporarily flying, or the government. In other words, this case is about who is “speaking” when that flag goes up, and whose free speech rights are protected.

If the court determines that the city of Boston is speaking, then the court’s government speech doctrine will apply. This would likely result in a ruling favoring Boston.

Federal, state and local governments oversee a wide variety of public spaces, such as parks, universities and courthouses, just to name a few. These areas serve different functions, some of which require more regulation of speech than others.

The Supreme Court has organized government spaces into several categories, each of which permits different types of restrictions on free speech. This set of categories and permitted restrictions is referred to as the public forum doctrine. 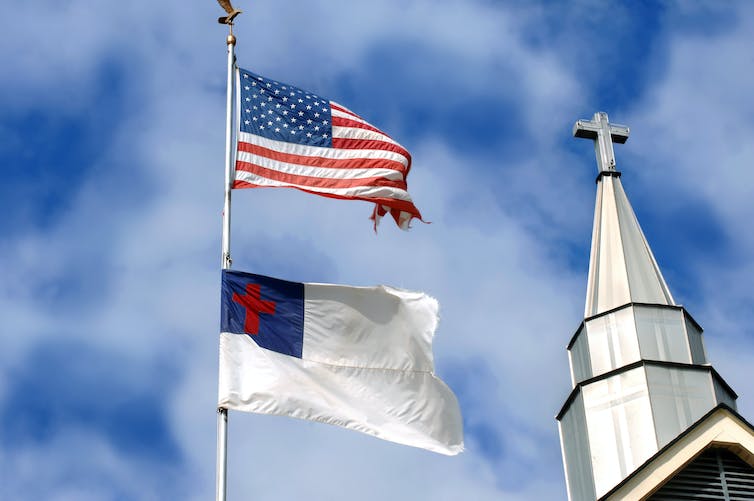 A Christian flag flies beneath the American flag next to a church steeple. nameinfame/iStock via Getty Images Plus

Camp Constitution notes that Boston previously approved 284 requests to raise other flags, and that there is no record of a prior request being denied.

But Boston counters that none of those previous requests were for religious flags. The city argues that only two types of flags have been permitted: flags representing territories, nations and ethnicities, and flags associated with publicly recognized days of observance, such as Veterans Day and LGBTQ Pride Month. Boston argues that such limited categories of approval are not what one would expect in a designated public forum, and that this is evidence that Boston has not turned its flagpole into a designated public forum.

[3 media outlets, 1 religion newsletter. Get stories from The Conversation, AP and RNS.]

Boston argues that raising a flag on the third flagpole at City Hall is government speech and therefore the city has the right to determine what views it wants to express on its flagpole. Camp Constitution disagrees, maintaining that the flagpole is a designated public forum and therefore few restraints on private groups’ free speech are allowed on the flagpole.

In 2009, the Supreme Court held in Pleasant Grove v. Summum that the permanent monuments in a park owned and operated by the town were government speech. The Supreme Court’s unanimous decision allowed the town to deny a request from a small religious group, Summum, to install a permanent monument expressing its beliefs, even though the park had previously accepted a monument of the Ten Commandments.

In 2015, the Supreme Court held in Walker v. Texas Division, Sons of Confederate Veterans that license plates were government speech. This permitted Texas to deny a request for a specialty license plate featuring the Confederate flag, even though Texas offered a wide range of other specialty plates. Unlike Pleasant Grove v. Summum, this case was decided by a slim 5-4 majority.

Shurtleff v. Boston will likely require the court to further clarify the government speech doctrine. The central issue is this: When another flag temporarily replaces Boston’s own, who is speaking?