They come from the Great Lakes state, countries all over the world, and even from outer space. The collection, and subsequent museum, of rare rocks and minerals at Wayne State University is a 54-year labor of love that will be renamed for its devoted curator, geology alumnus David Lowrie '64.

A unique space in Old Main that holds centuries of geological history, the David J. Lowrie Geology Mineral Museum honors Lowrie’s lifework and the recent endowed gift he and his wife Barbara Carson-McHale, M.A. '75, M.A. '83, made to the museum.

Throughout his five decades at the Department of Environmental Science and Geology in the College of Arts and Sciences (CLAS), Lowrie taught introductory geology courses as an academic services officer. Along the way, he acquired one of the finest mineral collections of its kind. Showcasing 350 of the most impressive samples selected from thousands in Wayne State’s holdings, the museum features marvels and curiosities that include rocks from Thomas Edison’s personal collection, fluorescent and phosphorescent rocks that can glow in neon colors, 4.5-billion-year-old meteorites, and exquisite examples of hundreds of minerals.

"David and Barbara's generosity, his expertise and his passion for this one-of-a-kind mineral collection leaves a significant legacy to the College of Liberal Arts and Sciences, to Wayne State and to Detroit,"

said CLAS Dean Stephanie Hartwell. "It is fitting that the museum is named in Dave's honor, and we are so grateful to him and to Barbara for this incredible gift." 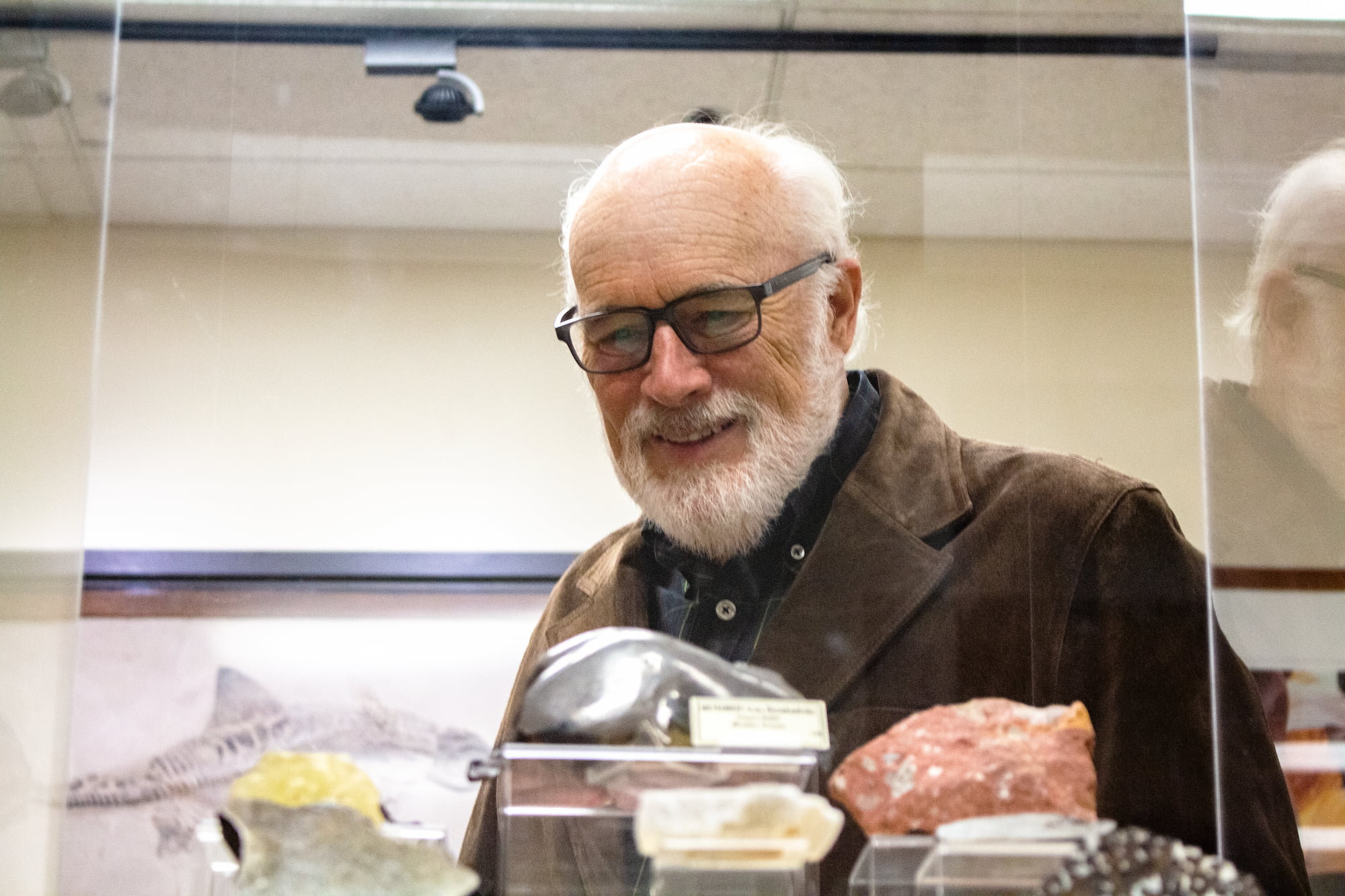 Every rock tells a story

To grow the holdings and connect with a community of geology academics, fans, collectors and curators, Lowrie took the Wayne State rock show on the road. “I've exhibited materials at the biggest mineral shows,” said Lowrie, who for more than 50 years traveled with special samples to gatherings in cities such as Tucson, Cincinnati, Pittsburgh and Detroit, as well as to many local shows around Michigan. As those connections grew, so did the number of gifts. “I was able to get several major donations of very fine minerals to the department’s collection,” which is recognized nationally and even internationally, he said. “It is a world-class collection.”

Barters, excavations, rescues (from a trash bin, in the case of the Edison collection) and innumerable gifts — many from geological societies or CLAS geology alumni who took Lowrie's courses — make up the majority of Lowrie’s acquisitions over the years. He estimates that two-thirds of the current samples come from his efforts in building awareness of Wayne State’s collection.

"I can count on one hand the number of specimens the department actually purchased, and have a few fingers left," Lowrie said. One barter, for example, involved a rare Wayne State specimen of babingtonite from Massachusetts that Carl Francis, the mineralogist and curator for Harvard University at the time, felt belonged in their collection. "Carl said, 'Well, I've got something that belongs in Michigan,' which was a copper calcite from the Keweenaw Peninsula, so we made a trade. And we both think we got the best of the deal," Lowrie said jokingly.

“Every rock tells a story,” Lowrie said, and his recollection of each sample’s origin and means of acquisition is encyclopedic. Lowrie and his colleagues look for samples from rare geological events or areas of the world. Having one of the largest or most peculiarly shaped specimens from a unique geological occurrence or location is a point of pride among curators and collectors, and Lowrie can tell you exactly what makes each sample special. Sometimes it is nature's fortunate accidents that merit a place in the museum cases — such as an agate that evokes a painted landscape, an apophyllite that looks like a rocket launching into space, or a perfectly cube-shaped small diamond that could pass for a sugary confection.

Even after his retirement, Lowrie still cares for the collection through regular visits a couple of times a week. Thinking about the future, he decided to make sure it would always be looked after. "My wife Barbara and I decided it would be nice to have some guarantee that the museum will stay open and be staffed, and that new specimens will be added once in a while," Lowrie said. "One way to do that was to make a donation that will provide permanent funds." 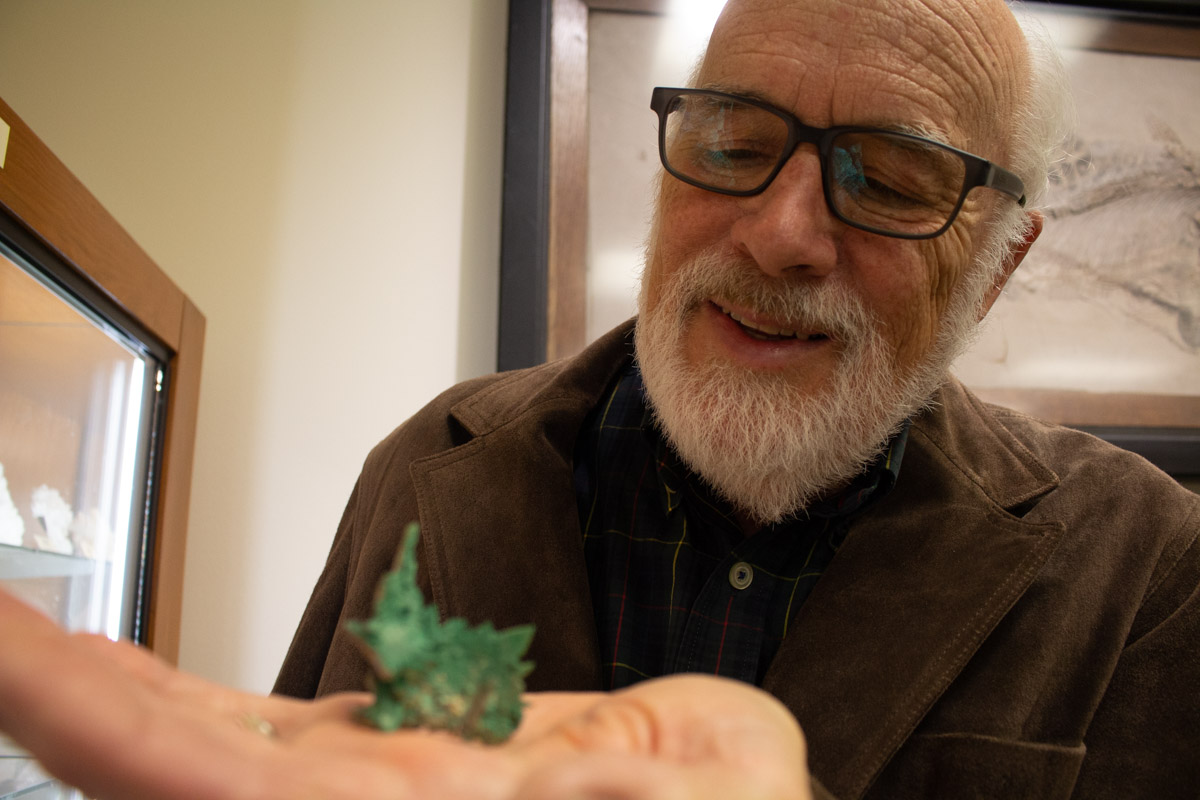 The David J. Lowrie and Barbara Carson-McHale Endowed Geology Support Fund will provide financial support to the museum from the endowed fund's interest earnings every year, forever. The annual funds will support the museum’s areas of greatest need, student docents, educational programming, acquisitions and care of the museum’s collection, and maintenance of the space. Most importantly, the gift solidifies that the museum will be a source of education and wonderment in perpetuity — as well as a source of pride for Wayne State.

"David’s knowledge of minerals is vast, and it has been fun enjoying their beauty and learning about their importance,” said Carson-McHale, who earned two master's degrees from Wayne State, in history and in art history. "I know how long and how hard David worked to get this museum together. To be honest, without him, there would be no museum, and we agreed that keeping it going and protecting it would be a worthy thing to do," she said. "An endowment is the best way to ensure that the funds will be there, because it lasts forever."

For the kids, it totally rocks

Rock collectors typically begin their fascination with gems and minerals around the age of 9, and Lowrie gets the biggest kick out of museum visits from children and school groups. Lowrie was 9 years old himself when his family moved to Birmingham, Michigan in 1950, and he started hanging around the Cranbrook Institute of Science.

"A naturalist at Cranbrook had a big influence on me and my life. I started going on field trips as a youngster, and he said I could go on all the trips I wanted, as long as I could find someone to drive me there," Lowrie said. Those science field trips involving biology and geology inspired his interest in collecting minerals, and the Cranbrook Institute of Science was an early source for his first personal specimens. 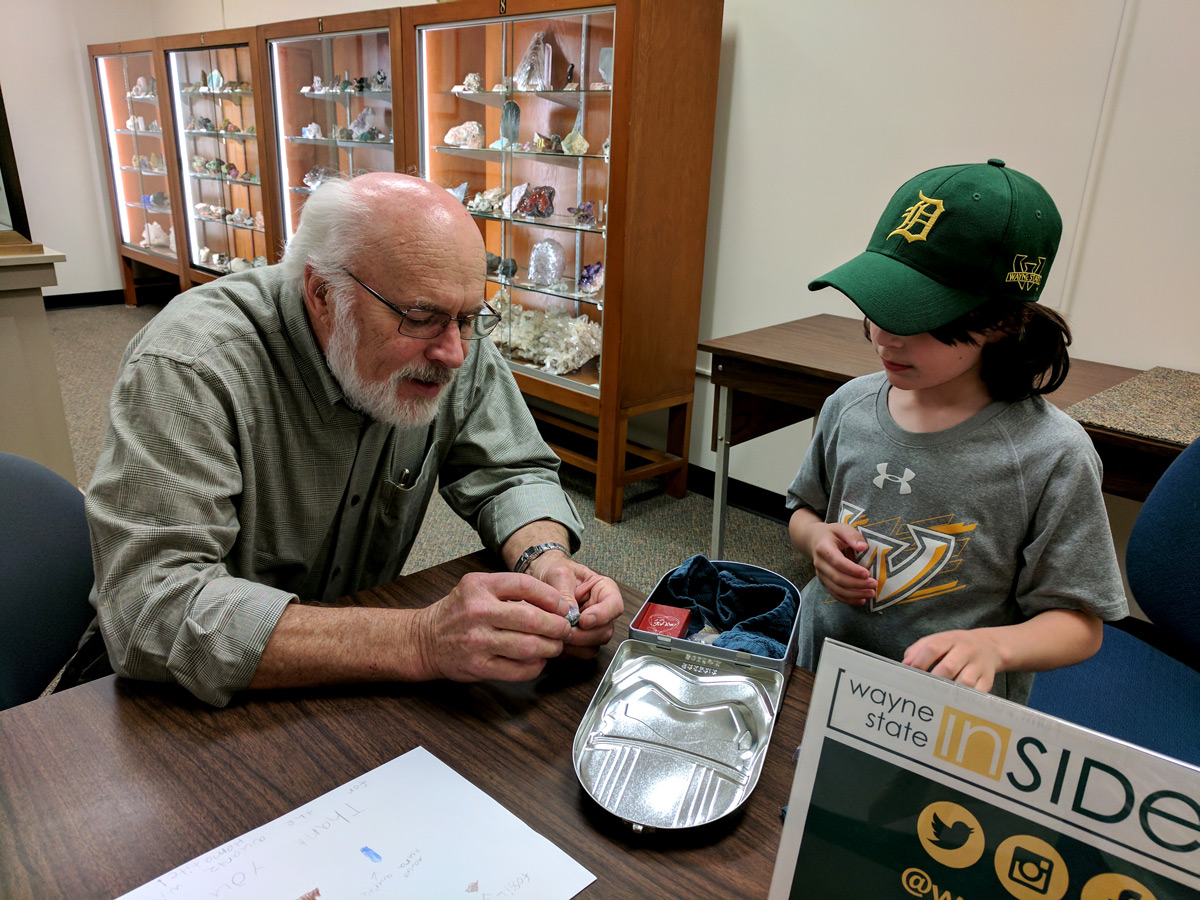 The David J. Lowrie Geology Mineral Museum specimens are organized by type as they would be in undergraduate CLAS geology courses, and young visitors enjoy learning about the science behind the samples. But Lowrie knows the kids are mostly wowed by the visuals. "They like the big, sparkly ones," he said with a smile, acknowledging that the same can be said for many adults. Lowrie embodies the true spirit of a rock collector — never growing less awed by gems and minerals, but only growing a larger collection over time. And the extraordinary collection he grew for Wayne State will inspire the inner child in countless rock appreciators, long into the future.