On June 9, 2021, JYM held its first annual Recognition and Award Ceremony via Zoom to present incoming JYM students accepted to the program for this year with JYM scholarships.

Also present were Dr. Hans-Peter Söder, resident director, who gave special recognition to Dr. Mark Ferguson, director 1995-2020, as well as Gina Horwitz, associate director of Philanthropy and Alumni Relations, Wayne State University, who talked about the Söder-Ferguson Next Generation Fund. She gave a special thanks to JYM donor, Stephen Stambaugh (1971-72), who was also present from Florida. Dylan Moore, J.D. (JYM 2010-11), from Berlin, sent a video greeting presenting the fundraiser his class sponsored for JYM in honor of their ten-year class reunion and as a way of giving back and supporting JYM through the pandemic. Jackie Smith, program coordinator in Detroit and Patricia Thill and Sommer Forschner, academic coordinators in Munich were also in attendance.

The Sommersemester 2021 cohort were in attendance and recognized:

The JYM cohort members of 2021-22, were also present with many of their parents and caretakers. 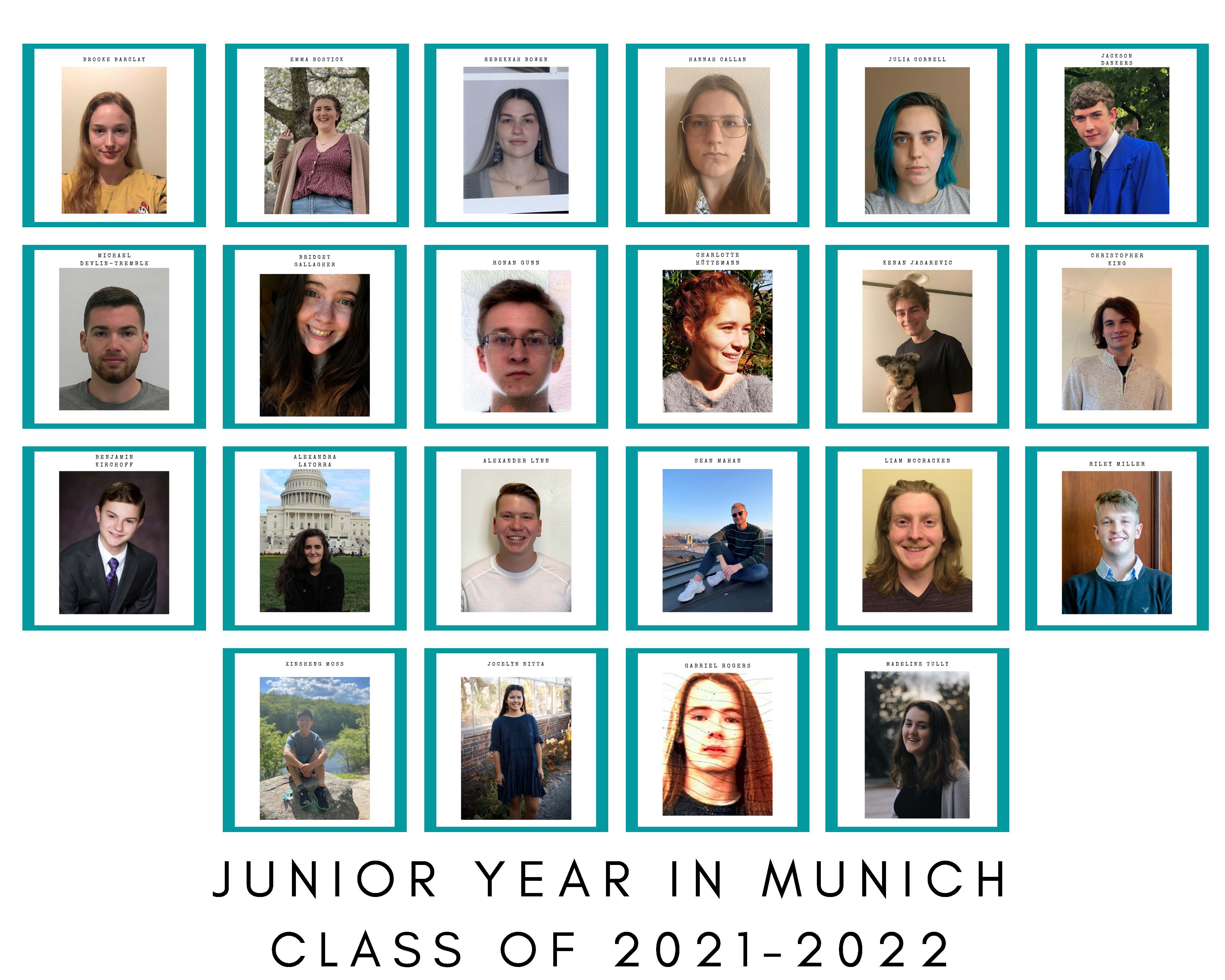 It was a wonderful online event that will definitely be repeated next year! JYM continues to be humbled by and grateful to JYM alumni generosity! Without your gifts, these scholarships would not be possible. Here is a list of the scholarships awarded, the stories behind them and this year’s recipients:

This scholarship was established by Mr. Adler because, as he wrote, “My JYM year of 1971-1972 was one of the most incredible and best years of my life in so many ways. I want to give others the opportunity to experience this and hopefully, this scholarship fund will help.” This award is intended to recognize scholastic achievement, encourage continued progress and aid students in financing their participation in the Junior Year in Munich Program.

The 2021-22 recipient of the Adler Scholarship is Alexandra LaTorra.

The Junior Year in Munich Scholarship Fund is a general fund that supports program participants from across the country.

Dr. Max Kade was an emigrant from Germany to New York City who became successful in the pharmaceutical industry. The company he co-founded is perhaps best known for the cough syrup “Pertussin.” In 1944, Kade and his wife founded the Max Kade Foundation in New York. While it initially focused on helping war victims, the foundation then shifted its focus to German-American cultural relations with the primary goal of the promotion of mutual understanding of the people and Cultures of Germany and the United States. The foundation has funded research facilities, libraries, dormitories, meeting places, German programs—and it is a generous provider of scholarships for JYM participants.

This scholarship honors JYM alumnus Ron Strube, who participated in the Junior Year in Munich Program in 1978-79. Growing up on a ranch in Wyoming was no easy childhood for this gay urban lawyer. Before himself succumbing to AIDs, Ron had lost many friends to this terrible disease, but he never lost the wry edge to his humor. This scholarship was established in his name to recognize scholastic achievement, encourage continued progress and provide assistance to students in financing their education in the Junior year in Munich program.

The 2021-22 recipients of the Ron Strube Memorial Scholarship are Alexandra LaTorra and Riley Miller.

The 2021-22 recipients of the Professor Marvin S. Schindler Endowed Junior Year in Munich Scholarship are Emma Bostick and Kenan Jasarevic.

This scholarship was established by JYM alumnus, Peter Wolf, and honors the memory of his friend and 1991 JYM alumnus Edward Stone who passed away in 2013 at the age of 43 after a multi-year battle with cancer. It aims to provide financial support to full-time undergraduate students enrolled in the Junior Year in Munich program who are in good academic standing and demonstrate financial need.

The 2021-22 recipients of the Edwin Stone Memorial Scholarship are Michael Delvin-Tremble and Bridget Gallagher.

Both Susan and Robert Thompson attended college junior year study abroad programs in Europe in the late 1970s. Susan was a participant in the Junior Year in Munich program, both as a student and upon graduation as an assistant to its Munich-based resident director Frau Dr. Marianne Riegler. Bob participated in his own college’s overseas study program, which was affiliated with the University of Freibourg in Switzerland. This scholarship is awarded to students majoring or minoring in a foreign language and who demonstrate both scholastic merit and enthusiasm for studying abroad.

Timothy Dolan (1959-2001) had a passion for all of life's experiences, large and small. As the first person given a leave of absence from the U.S. Military Academy at West Point to participate in a foreign study program, his drive to excel and inspire others was contagious. An extremely upbeat person who led by example, Tim is remembered by the JYM class of 1980/81 as someone who would take on the biggest guy on an opposing rugby team just to experience the joy of victory or the agony of defeat. The enthusiasm with which Tim embraced life taught others to discover – in even the smallest event – an occasion for their own personal growth. He reminds us never to forget that it's often those small memorable moments that really make life enjoyable, interesting and worthwhile. The 2021-22 recipient of the Dolan Scholarship is Bridget Gallagher.