Dana (Kirby) Ettmayer (JYM 2000-01) represented Daimler AG and worked with the American artist Janet Echelman on an art installation on Odeonsplatz for Mercedes Benz as part of this year’s the IAA (Internationale Automobil-Ausstellung).

The IAA took place in September in Munich instead of its usual host city of Frankfurt to the theme Mobility. The sculpture by Echelman was called Earthtime 1.26 Munich and was made up a net of LED lights that impressively transformed Odeonsplatz and the Feldherrnhalle at night. This was one of a few installations seen at various locations throughout Munich. Dana has been working for Daimler AG and living in the Stuttgart area for the last thirteen years, where she is married and has two school-age boys.

Kate and Danil met on the program during their junior year and were married in Detroit in May 2021! JYM extends a big congratulations to this lovely and successful couple.

Danil is currently an attorney at the U.S. Department of Justice. Kate is an Artistic Associate at ExPats Theatre in Washington, D.C., led by Karin Rosnizeck, an actor and director originally from Munich. ExPats focuses on intercultural dialogue and presents contemporary translated works through a feminist lens. Kate was assistant director for their last show, PANKRÁC '45, written by Czech playwright Martina Kinská and translated by Barbara Day. Kate is working on a translation of Katharina Schmitt's play, KNOCK OUT, and completing her M.F.A. studies in Dramaturgy at Columbia University. 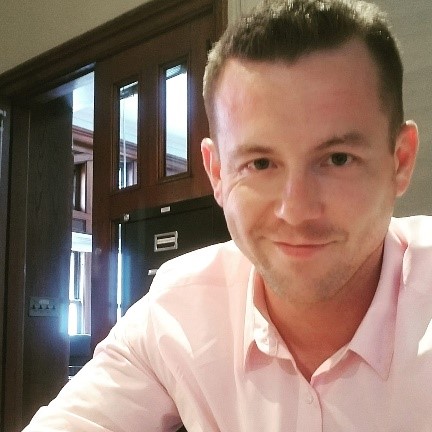 JYM was very saddened to learn about the death of alum Sean McDowell (JYM 2007-08), who died a year ago in September 2020 at the young age of 34. We were aware of Sean’s ups and downs as he continued to stay in contact with JYM well after his time abroad in Munich.

We remember him as being a keenly bright young man who liked to grapple with big ideas and intellectual topics and ideas. During his time on the program, he was quite at home in the Land der Dichter und Denker being a fan of German philosophers such as Friedrich Nietzsche. Our deepest condolences go out to his family, friends, and JYM cohort a few of who maintained long-term friendships with Sean. View obituary

Isabella Garces (JYM 2016-17) wrote JYM to let us know that she is now working for The Metropolitan Museum of Art, writing and creating content for exhibitions and permanent collections. During her junior year, she did some writing and editing for the Zeitschrift Wendepunkt which is edited by Prof. Söder. She has also dedicated more of her time to writing in general with her own website. 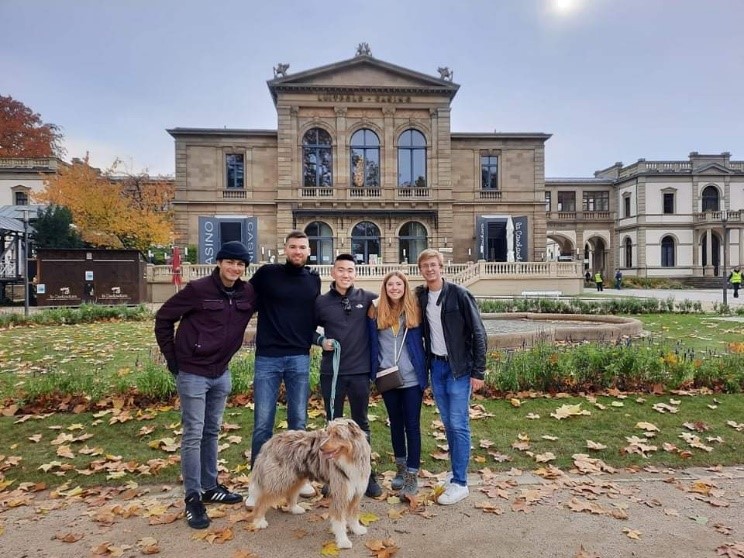 Theo Widjaja (JYM 2017-18) has returned to Munich on a Teaching Fulbright for this academic year 2021-22. He has been placed in a Gymnasium and Realschule in Holzkirchen bei München. He has been also able to help show new students the ropes as an experienced Münchner.

Gabrielle (Lunt) Beck (JYM 2017-18) has married and moved from Frankfurt to a small village near Bad Kissingen where her husband grew up. This fall during orientation for Halloween her classmate Theo and a group of current JYM students came to visit her and her husband and dog and showed them around Bad Kissingen and they did a hike near her village Großenbrach. In the evening they dressed up for Halloween and passed out candy to the neighborhood kids.

Jackie Olson (JYM 2018-19) has received a Teaching Fulbright in Vienna, Austria for the second year in a row. Her first year was spent navigating the height of the pandemic during the academic year 2020-21 when many classes were online. She was also in Vienna during the terrorist attack that happened there in November 2020. Jackie writes about her reaction to the terrorist attack.

Andrew Hesbacher (JYM 2018-19) received a Teaching Fulbright in Bochum, Nordrhein-Westfalen at a Gymnasium for the academic year 2021-22. We were pleased to have Andrew for a visit to Munich this last fall.

In October 2021, JYM re-kindled the JYM Stammtisch for alumni in Munich or elsewhere in Germany. It was a successful turnout. The motto was JYM Statt O’Fest since the Oktoberfest was canceled for the second year in a row due to the 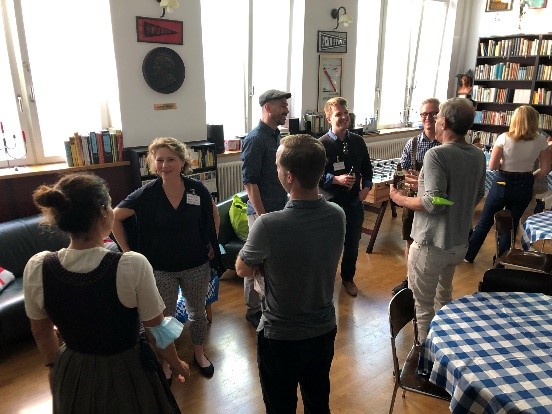 pandemic. The Stammtisch was held at the JYM headquarters. A few guests turned up in Tracht, there was Bavarian music in the background and we served Bavarian Brezen and other refreshments.

It was great for everyone to meet one another and network. It was great for us to catch up with so many alumni! Many others who couldn’t make it expressed interest in attending a future Stammtisch. Other parallel Stammtische will be hosted in Stuttgart and Berlin and or elsewhere!

Sam Sjoberg (JYM 2019-20) returned to American University and finished his BA degree after his study abroad year was cut short due to the pandemic. He has now returned to Europe on a Teaching Fulbright which he is doing in a small town in Austria near Salzburg!

Riley Miller (JYM 2019-20) returned to JYM as a member of the JYM 2021-22 cohort for his final semester before graduating from Grand Valley State University. This was his way of making up for the lost semester during his junior year. What’s more, Riley has just landed a prestigious full-time six-month internship with BWM in Munich which he will be starting immediately post-graduation in March 2022! JYM congratulates Riley and wishes him much-continued success!