Courts have avoided refereeing between Congress and the president, but Trump may force them to wade in

Congress and President Trump are engaged in a power struggle that historically has been avoided by the courts. AP/J. Scott Applewhite

President Donald Trump’s refusal to hand over records to Congress and allow executive branch employees to provide information and testimony to Congress during the impeachment battle is the strongest test yet of legal principles that over the past 200 years have not yet been fully defined by U.S. courts.

It’s not the first test: Struggles over power among the political branches predate our Constitution. The framers chose not to, and probably could not, fully resolve them.

And federal judges have been reluctant to weigh in when presidents refuse to share information with Congress. From 1789 until Trump’s inauguration in 2017, federal courts had only considered five cases in which the president claimed executive privilege in response to a congressional subpoena.

Judges believed that the framers intended for the political branches to resolve such conflicts through negotiation.

“Each branch should take cognizance of an implicit constitutional mandate to seek optimal accommodation,” wrote the D.C. circuit court in 1977.

In other words: the political branches should be able to compromise and work it out on their own. 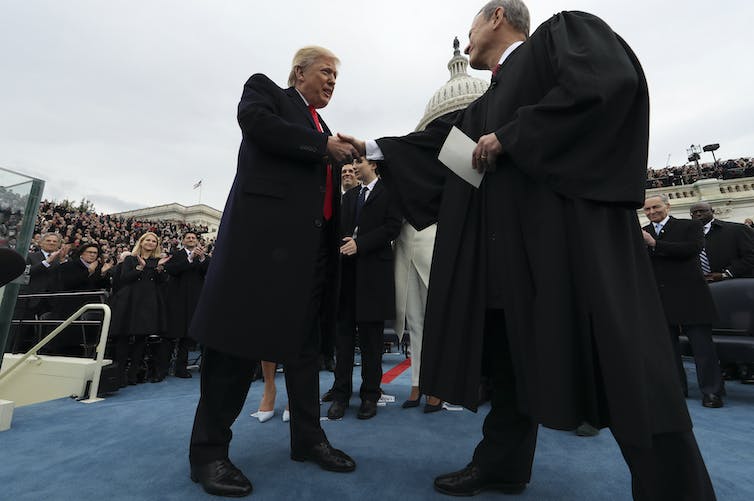 The courts’ reluctantly started to intervene in power struggles between the president and Congress in 1973, when President Richard Nixon asserted absolute presidential immunity – or what’s called “executive privilege” – in response to a congressional subpoena to hand over tapes related to the Watergate scandal.

The United States Constitution divides powers among three co-equal branches: the executive, judicial and legislative. This separation of powers is meant to ensure that no one branch gains too much power.

Based on these constitutional principles, executive privilege allows the president to withhold certain information from Congress, the courts and the public. Full transparency, the argument goes, could endanger the nation or prevent the president from getting candid advice from his advisers.

But executive privilege often clashes with Congress’s oversight role. The Constitution gives Congress the power to review, monitor and supervise implementation of public policy by the executive branch.

Trump has championed a more expansive view of executive power than most other presidents. He has asserted executive privilege over a dozen times in refusing to provide information to Congress.

Trump’s attempts to limit congressional power extend beyond executive privilege claims. He has issued executive orders in the face of congressional opposition and even sued his own personal and business accountants to prevent them from handing his tax information over to Congress.

Unlike previous presidents, Trump is unwilling to negotiate with Congress over their requests for materials. He is determined to take his fight with Congress to the courts.

United States v. Nixon is mentioned frequently now as the most relevant case in the fight between Congress and Trump over executive privilege.

But United States v. Nixon did not consider a claim of executive privilege in response to a congressional subpoena. It was about a subpoena issued by a federal prosecutor in a criminal investigation.

Astonishingly, the Supreme Court has yet to weigh in when a president refuses to comply with a congressional subpoena – even though presidents since George Washington have resisted congressional demands for information.

Washington refused to give documents to Congress. Every president since Nixon has asserted executive privilege to avoid giving various kinds of information to Congress.

Federal courts have largely stayed out of these disputes. 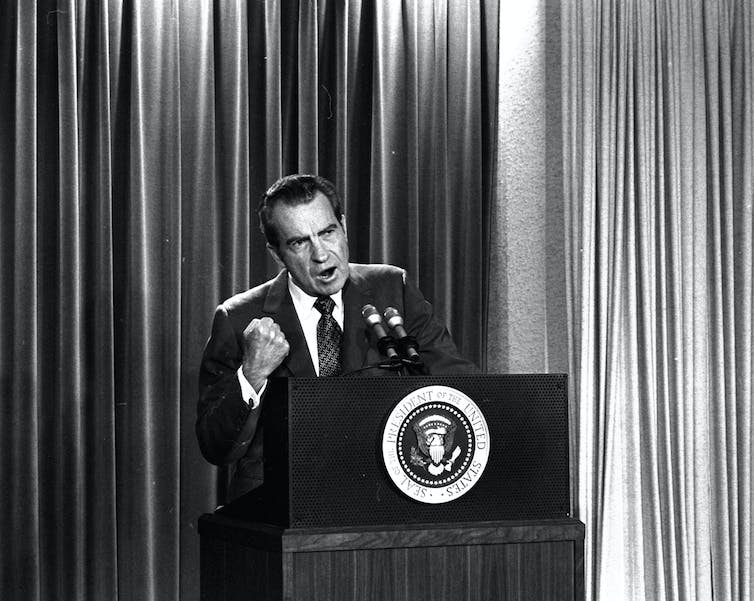 President Nixon tells the press on March 15, 1973, that he will not allow his legal counsel, John Dean, to testify on Capitol Hill on the Watergate investigation. AP/Charlie Tasnadi

In 1977, the D.C. circuit court refused to consider a dispute between Congress and the FBI – part of the executive branch. Congress wanted FBI letters related to wiretaps of American citizens. The court directed the two political branches to resolve it themselves.

The conflict wasn’t resolved and the court took the case. Its opinion states the concern that courts have when approaching these questions:

“When we first came to the case, we developed a novel and somewhat gingerly approach for the delicate problem of accommodating the needs and powers of two coordinate branches in a situation where each claimed absolute authority. To the extent possible, we wished to avoid a resolution that might disturb the balance of power between the two branches and inaccurately reflect their true needs.”

Other federal courts have followed the D.C. circuit’s lead, emphasizing that, as the D.C. district court put it, “judicial intervention should be delayed until all possibilities for settlement have been exhausted.”

This reluctance to intervene means there is very little controlling law on executive privilege when the president uses it to avoid congressional demands for information.

In 2013, the Obama administration asserted that the courts did not have jurisdiction in its dispute with Congress over documents that lawmakers had subpoenaed. The D.C. district court responded by stressing the importance of judicial review. Without it, said the court, one branch of the government could end up with more power than it should.

“No opportunity for judicial review, would elevate and fortify the executive branch at the expense of the other institutions that are supposed to be its equal,” the court wrote.

Courts have extended United States v. Nixon’s rejection of presidential claims of absolute immunity to congressional oversight cases. Concluding that former White House counsel, Harriet Miers, had to testify before Congress about the forced resignation of nine U.S. attorneys in 2006, the D.C. district court emphasized “The Executive cannot identify a single judicial opinion that recognizes absolute immunity for senior presidential advisers in this or any other context.”

Rather, the court wrote, “an executive branch official may assert privilege on a question-by-question basis as appropriate.”

Courts have also upheld Congress’s oversight powers to issue subpoenas and hold recalcitrant witnesses in contempt. The Miers case is instructive: “Congress’s power of inquiry is as broad as its power to legislate and lies at the very heart of Congress’s constitutional role,” wrote Judge Bates.

President Nixon gave up his attempt to stop his staff from providing testimony to Congress in the Watergate scandal. Screenshot, New York Times archive

The recent district court opinion in Committee on the Judiciary v. McGahn – a case where Trump barred his White House attorney from testifying before Congress – follows these precedents.

Trump claimed executive privilege in McGahn. The court said, “The President does not have (and thus, cannot lawfully assert) the power to prevent his current and former senior-level aides from responding to congressional subpoenas.”

“If a duly authorized committee of Congress issues a valid legislative subpoena to a current or former senior-level presidential aide, the law requires the aide to appear as directed, and assert executive privilege as appropriate,” the D.C. district court wrote.

With several of Trump’s challenges to congressional subpoenas currently percolating in the federal courts, an ongoing impeachment investigation, and no signs of negotiations between the Trump Administration and Congress, the judiciary may have to act. They may have no choice but to fill the gaps in the law when Congress needs information from the president.

[ You’re smart and curious about the world. So are The Conversation’s authors and editors. You can get our highlights each weekend. ]