This fall, Wayne State made history. WSU’s Russian Program hosted the first major group of Belarusian students to ever visit a U.S. university.

The group also raised awareness about their country through a series of presentations on Belarusian life and culture in a number of Russian, global studies, and history classes, as well as at the University of Michigan’s Center for Russian and East European Studies and Cesar Chavez High School in Southwest Detroit.

The visit was transformational for WSU and the Belarusians students alike. Not only did both sides learn about each other’s respective cultures, they also developed their Russian and English language skills and forged important personal and professional relationships.

“It was an amazing trip,” recalls Vitebsk State student Ksenia Ivanter. “I had a chance to immerse myself in American culture and I made new friends. I compared Belarusian and American ways of living, food, systems and education and a lot of other things. This trip was more than just a trip for me. It was a kind of traveling into the dream of my childhood.” 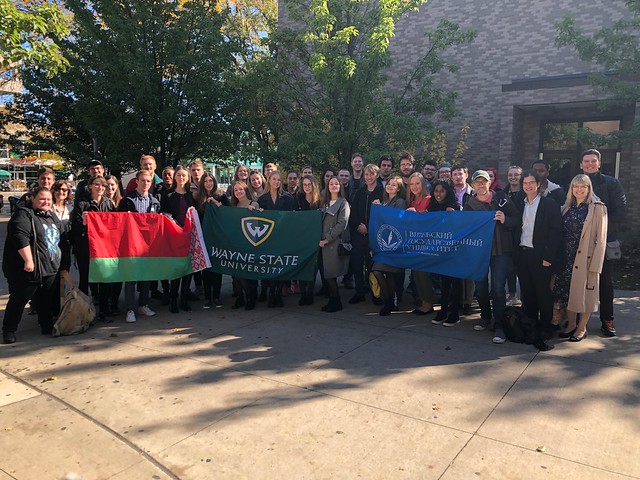 In 2017, WSU’s Russian Program introduced a cutting-edge curriculum centered on virtual exchanges with students in Belarus to develop language and culture skills. This culminated in the visit of 10 WSU students and faculty to Vitebsk State University in March 2019, making Wayne State the second U.S. university to send a student group to an institution of higher education in Belarus.

The visit was made possible by the generous funding and support of over one hundred individuals and institutions, including the U.S. Embassy in Minsk, Wayne State’s Office of International Programs, the College of Liberal Arts and Sciences, the Department of Classical and Modern Languages, Literatures, and Cultures, and Vitebsk State University.