Image: An attorney for the Muslim enclave of Islamberg prays in a mosque in Tompkins, New York. American Muslims have a history going back 400 years. AP Photo/Mark Lennihan

Most Americans say they don’t know a Muslim and that much of what they understand about Islam is from the media.

It’s not surprising then to see the many misunderstandings that exist about Muslims. Some see them as outsiders and a threat to the American way of life and values. President Donald Trump’s controversial policy to impose a ban on Muslims from seven countries entering into the United States played into such fears.

What many don’t know, however, is that Muslims have been in America well before America became a nation. In fact, some of the earliest arrivals to this land were Muslim immigrants – forcibly transported as slaves in the transatlantic trade, whose 400th anniversary is being observed this year.

Scholars estimate that as many as 30% of the African slaves brought to the U.S., from West and Central African countries like Gambia and Cameroon, were Muslim. Among the difficulties they faced, were also those related to their faith.

As a scholar of Muslim communities in the West, I know African slaves were forced to abandon their Islamic faith and practices by their owners, both to separate them from their culture and religious roots and also to “civilize” them to Christianity.

Historian Sylviane Diouf explains how despite such efforts, many slaves retained aspects of their customs and traditions, and found new, creative ways to express them. Slave devotionals sung in the fields, for example, kept the tunes and memory of a bygone life alive well after the trauma of dislocation.

Diouf argues that blues music, one of the quintessential forms of American culture, can trace its origins to Muslim influences from the slave era. She also demonstrates how the famous blues song, “Levee Call Holler,” has a style and melody that comes from the Muslim call to prayer, the “adhan.”

Blues has also influenced a host of other American music genres, from country to rock ‘n’ roll, and the most well-known of American musical forms, jazz. The famous jazz player John Coltrane, known for his seminal work “A Love Supreme,” appears to be influenced by the cadence of Islamic prayers and devotionals.

Scholar Hisham Aidi, author of “Rebel Music,” along with a host of jazz musicians, argues that Coltrane is singing “Allah Supreme” in the Islamic devotional style of “dhikr,” or remembrance of God.

The Muslim communities of America today

Today’s America incorporates a large diversity of Muslims, who have immigrated from many parts of the world. Many immigrated after the passage of the Immigration Act of 1965.

They are from Africa and the Middle East, as well as South and Southeast Asia. African American Muslims, descendants of the slave generations in this country, comprise a sizable chunk – about 20% – somewhere between 600,000 to 850,000 – of the total Muslim population in the in the United States.

This diversity is reflected in the customs, interpretations and rituals practiced by the many denominations here. It is also reflected in the racial, ethnic and cultural composition of the community, or perhaps more accurately, a group of communities. 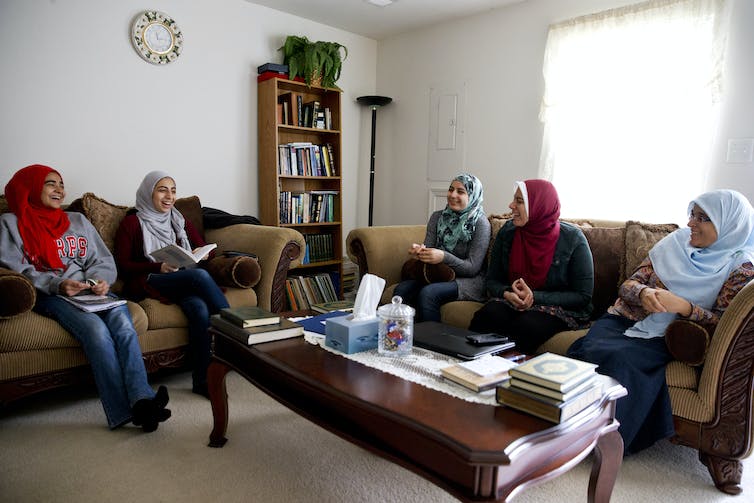 There is a large and diverse Muslim community in the U.S. today. AP Photo/Jacquelyn Martin

All these differences can make interaction between these communities a challenge. But American Muslims, despite their complex histories, have learned to blend experiences that are truly unique.

As more recently arrived immigrant Muslims interact with their coreligionists whose legacy dates back 400 years in this country, new engagements inform the new reality.