Michael Zadoorian has written ad copy for used car dealers and for luncheon meats, for banks, for pizza chains. But early on, away from work and under the heavy influence of Raymond Carver short stories, he quietly wrote stories of his own, too. Zadoorian never shared those stories with anyone until enrolling in a writing class at Wayne State. He wasn’t even sure he was after a masters at the time. By the time he graduated, with an M.A. in creative writing, his stories had been published in several national journals, including the Beloit Fiction Journal and Literary Review.

Zadoorian’s first short story collection, published by Wayne State University Press, has become part of the Detroit literary canon. The Lost Tiki Palaces of Detroit offers intimate glimpses into the lives of graffiti artists, scrappers, urban explorers—Detroiters. It also contains the fruits of his MA thesis—the story “Mystery Spot,” which itself bore even more fruit: Zadoorian’s second novel, The Leisure Seekers. Helen Mirren and Donald Sutherland have signed on to star in the film adaptation, to which Sony Pictures Classics has bought the rights.

Zadoorian’s first novel, Second Hand—about the owner of a second-hand store in Detroit—is a cult favorite, sold throughout the world and published in several languages. It was selected for the Barnes & Nobles Discover Great New Writers Program and won the prestigious New Writers Award from the Great Lakes College Association. The New York Times called it “a gift from the (Tiki) gods.”

Zadoorian continues to live in and write of metro Detroit.

Why had you decided to pursue creative writing? Was the program at Wayne State what you had anticipated, or were there surprises?

I just wanted to take some writing classes. After a while, I figured that I might as well get my M.A. while I was at it. The professors were always the surprise to me. Everyone I worked with—Samuel Astrachan, Charles Baxter, Chris Leland—all of them took my work seriously. It made a huge difference.

Did it help the writing?

It certainly did help my writing, but I feel lucky that I didn’t have what you might call a typical M.F.A. experience. I’m not sure that would have worked for me. Since I had been writing on my own, I think the professors recognized that I was serious about it, so they were happy to guide and encourage me, which helped enormously. But because I had a real job at the time, I didn’t participate in much else than my classes. I took one class in Literary Criticism. That was not for me. I wanted to create, not analyze or deconstruct what someone else had created.

Was publishing a difficult thing to break into, or did it happen quickly for you?

There was about three years of constant rejection before I started to get anything accepted. When I was in the program at Wayne, I was working by then and taking classes at night. When I took my first creative writing class at Wayne State, I had already been writing on my own for a few years, but not really sharing it with anyone. I certainly wasn’t sending it out. By the time I graduated in ’95, I had been published in literary journals, including Beloit Fiction Journal, Wisconsin Review and The Literary Review. That first class was the first time I had shown my work to anyone.

Your M.A. thesis was the short story “Mystery Spot.” Was that the version that wound up in Tiki Palaces? That story also became your second novel, Leisure Seeker. Had you always known there was going to be more from those characters?

I’m sure that I rewrote it a few more times, but it was essentially the same story (as the thesis). It was a few years after Second Hand came out. At that time, I didn’t really think that there was going to be another novel. I had written one that my editor ultimately rejected, then it was rejected everywhere else as well. I was really discouraged, plus my father had just died. It was a low point for me, but I wasn’t going to quit writing. I looked at that story and was pretty sure I could make a book out of it. What I didn’t realize at the time was how much I needed to write it. The book was very much inspired by my family and what we had all been through with my father’s Alzheimer’s Disease.

Creative writing programs, and workshops in general, are known for favoring the short story over the novel—and for practical reasons, probably necessarily so. How was the process of moving from short story to novel for you? Had the experience at Wayne helped prepare you at all?

Short story writing for me is still a painful process. Finding the idea takes me forever. There is something comforting about working on a novel. Knowing that I have something to work on every day is easier for me. I think the M.A. program at Wayne did prepare me just by giving me the tools and confidence to write and keep writing. For me, the only way to learn to write a novel was by writing a novel.

Had you ever considered that The Leisure Seeker might be made into a film as you were writing it? How involved have you been with the film?

At the time I wrote it, I didn’t even think if it would be made into a book, much less a film. At that point, I had nothing to lose. So to see it get so much attention is great. And now that it’s going to be a film, I’m hoping that it will make the next book easier to get out there. As for my involvement in the film, so far there hasn’t been much. The director and production company developed it on their own and I’m totally fine with that.

Are you still in contact with any of your peers from the writing program, faculty or fellow students?

I kept to myself a lot during that time, probably because I was working as well as going to school. I didn’t really feel like I fit into any literary scene at the time. (And sort of still don’t.) After I graduated, I remained very close to my advisor, the late Christopher Leland. He continued to help and guide me, which I think he did for all of his students. Lately, I’ve gotten to know other folks, like Mike Liebler.

Is your paycheck dependent on your fiction, or is your fiction something you can produce when everything else is finished? How do you balance it with all the other demands of life?

For the record, fiction has never, ever been a primary source of income for me. I don’t think it is for most writers. This is something that still amuses me when I speak to groups, that people think that getting a novel published means you can quit your day job. Maybe that’s the way it is for one or two percent of the writers out there, but the rest of us have to hustle. Most writers in America teach in some way or another or have a day job. I have worked as an advertising copywriter for decades. I was good enough and lucky enough to get myself into a situation at one place where I could work part-time. I worked there every afternoon and had my mornings free to write fiction. I had enough money to support myself, but still had time to write. It was a good balance of art and commerce.

It’s mostly a daily routine for me. Not much has changed. There is a lot of sitting at my desk, reading my notes, trying to come up with something that I like and that compels me.

Has the publishing landscape changed much, from the writer’s perspective, in the last twenty or so years you’ve been writing and publishing?

As far as publishing with a large, traditional publisher, I believe that it has gotten more difficult. I think some of that is because the publishing world is still trying to find itself in light of all this new technology. It feels like what the music world was going through fifteen years ago, only worse because publishing is even farther behind the times. The good thing is that there are so many smaller, independent publishers these days that are doing a great job and actually want the less commercial voices that seem to scare the big publishers. Again, I’m not sure making money even enters into it. Most of us find a way to make money so we can write fiction.

Given that, is a creative writing program something you would encourage young writers and prospective students to pursue?

I think it can be a good thing, but what’s even more important is being committed to doing the work—reading, writing, putting in the time. Honestly, at this point in my career, I feel fortunate that I didn’t go through some typical M.F.A. program. Looking back, I see that my experience with the M.A. in creative writing at Wayne State worked really well for me. M.A. or M.F.A. programs, writers’ groups, workshops are all fine, use them for everything you can get from them, but at a certain point, you have to listen to yourself. You have to find your own way to say what you want to say. 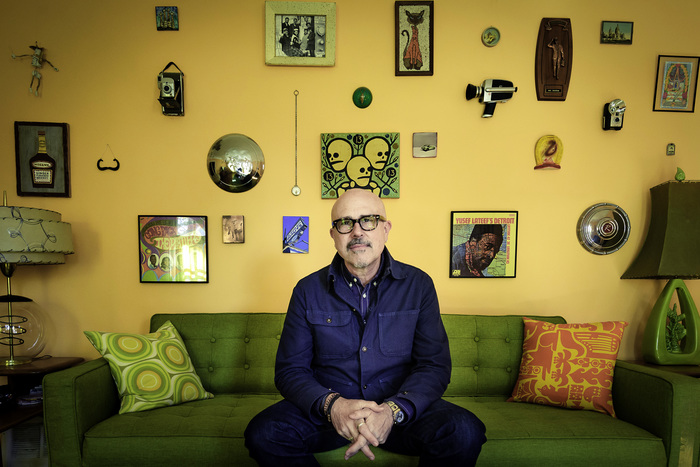