Senior Delani Degrosky set to graduate with honors and employment

Things could have gone differently. Wayne State senior Delani Degrosky could have stuck with chemical engineering, her initial major. Or she might have stayed with computer science, another major she flirted with. But when a friend told her about a technical writing class they were enrolled in, she was intrigued. She decided to check it out. 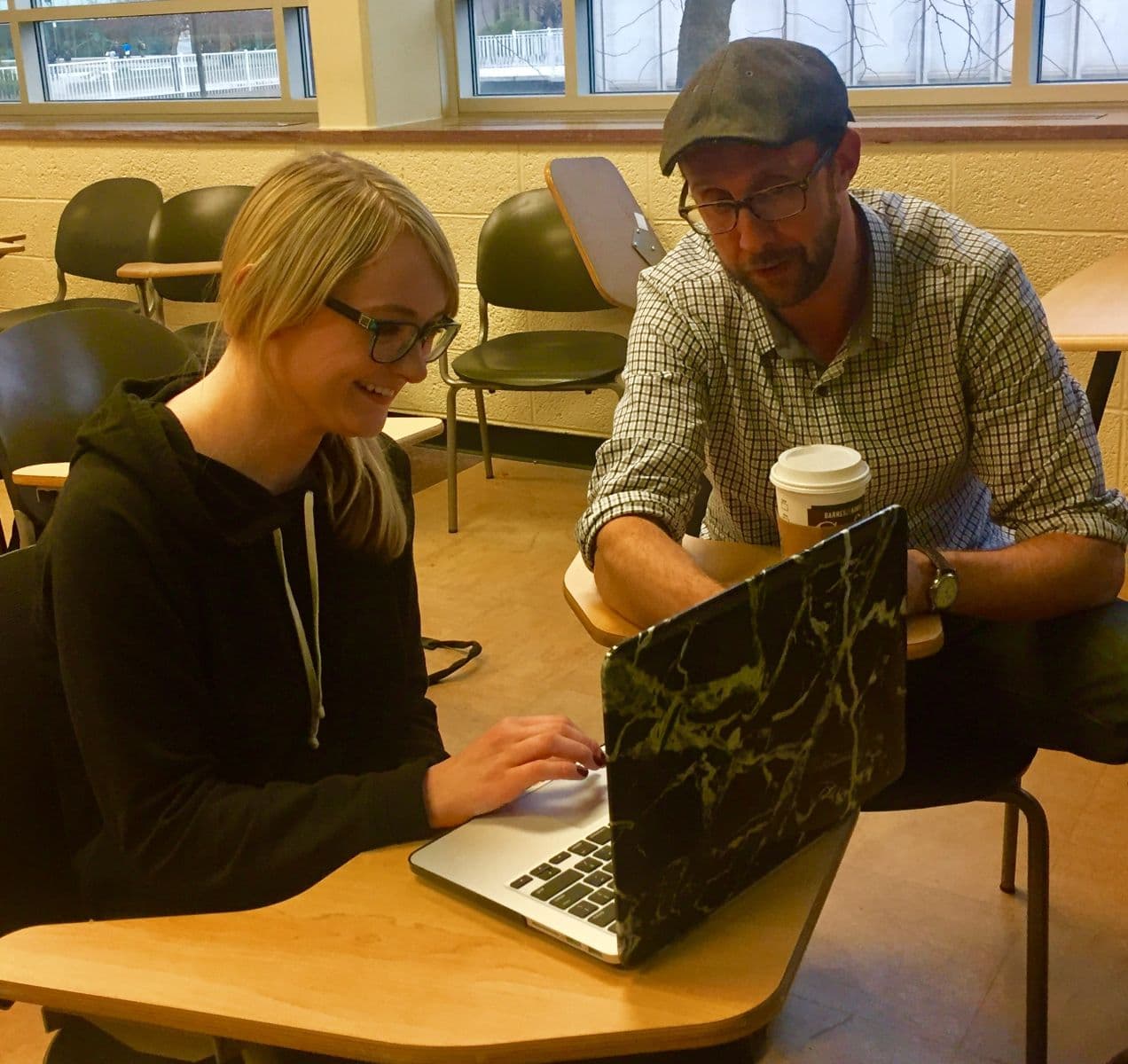 “The professor was this really hip dude,” says Degrosky. “He and his wife are both technical writers, and they’re in a folk band. I just sat in on their lectures, and it sounded really interesting. It was a whole field I never knew existed.” Today, with a near-perfect academic record and a paid technical writing gig, Degrosky is one summer semester away from graduating with her bachelor's in English and will start her M.A. in the field this fall.

It was as a sophomore and brand new English major, however, that Degrosky enrolled in Senior Lecturer Jared Grogan’s ENG 3050 course, Technical Communications—just as Grogan was building a partnership with TechTown, the Detroit-based business incubator. His course pairs Wayne State students with TechTown businesses in need of technical communications expertise. DeGrosky’s class was paired with Identilock, the news-making gun-safety product made by Detroit entrepreneur Omer Kiyani and his company Sentinl. Kiyani visited the class to discuss the company’s needs, says Degrosky, and then students split into groups to devise strategies for addressing those needs.

“Everyone worked on different things,” she says, “from writing blogs and manuals to social media strategy. We took what we learned in class—the theory and everything—and implemented it into the actual website and other writings for them.” “Delani stood out for her effort and negotiations with team members,” says Grogan. The following summer, Degrosky continued her work with Identilock as an intern through the Department of English. She still continues to write for the company, working on its website, manuals, and whatever other needs arise.

The TechTown partnership is a part of Wayne State’s Technical Writing Initiative, launched in 2015. It is increasingly important, says Grogan, that “English and liberal arts show direct relevance outside of teaching and academia,” and the TechTown partnership is an exemplary model of such relevance. “The ‘soft skills’ being valued need clearer articulations in real (and new) economic ventures and contexts,” he says. “TechTown is an interesting case study for us, and students can think pretty deeply about what a tech-driven, flexible economy in Detroit might become.” Students should also think about the skills or experiences they should develop to meet these needs, he explained.

Degorsky first met Grogan in her introductory composition course. “I was super into rhetoric. I was amazed by it,” she says. “And he’s a total rhetoric guy. When I told him I was interested in rhetoric and technical communications, he was like, ‘what?! Nobody is at your age.’” They bonded over music, too. “We would just talk about the philosophy and art of rhetoric. And I just thought, ‘man, this is so cool.’”

In high school, Degrosky loved chemistry and physics, and the hard sciences generally, but she always loved writing, too. Her father, an elementary school teacher, is also a poet.

“We grew up writing,” she says. “I liked to read about engineering” and science, “but I didn’t love all the tedious work” related to the discipline. “Writing is much more fulfilling,” she says. “It sort of combined the two for me. I just started taking more English classes.”

“Delani has taken some big risks as a student,” says Grogan, “not only switching to English but taking challenging, high-level classes early.” Degrosky took graduate-level courses as an undergraduate as part of the English Accelerated Graduate Enrollment (AGRADE) program. She’s currently enrolled in a 7000-level course on rhetorical theory with Professor Richard Marback—a course usually reserved for Ph.D. students.

“It’s crazy,” she says. “It’s stressing me out. It’s fascinating, but I’m definitely out of my league. I’m like the baby of the class.” She’s also taken courses in Wayne State’s creative writing program, several with Detroit poet and Senior Lecturer M.L. Liebler. “I love him dearly,” she says.

Degrosky’s particular background prepares her well for a field that is expanding faster than most. The Bureau of Labor Statistics projects that technical writing as a field is expected to grow by ten percent between 2014 and 2024, well above the national average. “Employment growth will be driven by the continuing expansion of scientific and technical products and by growth in web-based support,” the bureau reports. “Job opportunities, especially for applicants with technical skills, are expected to be good … and “experience with a technical subject, such as computer science or engineering, is important.” And even within academia, in the always precarious humanities, Rhetoric and Composition studies are doing surprisingly well. “The academic field is growing and the academic job market is quite good!” says Grogan.