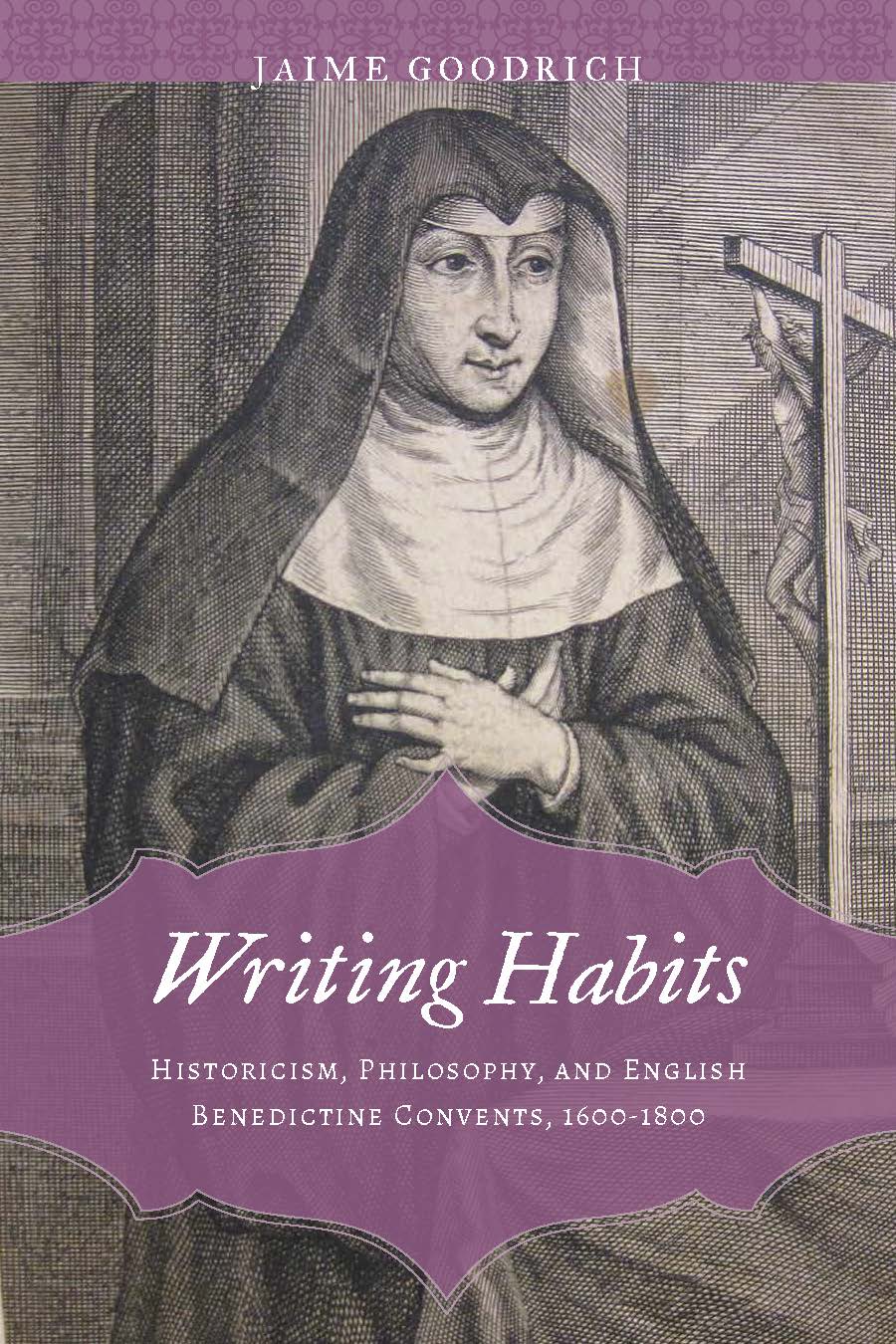 In fall 2021, Dr. Jaime Goodrich (professor and associate chair) published her second monograph, Writing Habits: Historicism, Philosophy, and English Benedictine Convents, 1600-1800 (University of Alabama Press). A faculty member at Wayne State since 2008, Professor Goodrich earned her B.A. in English and classics at Smith College (2001) and her Ph.D. in English at Boston College (2008).

She specializes in early modern literature, with a specific focus on women writers and religion. Her research seeks to recover the ignored, lost, or overlooked voices of women from the past. She has received several fellowships supporting this work, including grants from the US-UK Fulbright program and the Moore Institute at the National University of Ireland, Galway.

The Fulbright program provides fellowships that foster international exchanges between academic institutions in the United States and abroad. This prestigious honor provides a once-in-a-lifetime opportunity for graduate students and professors to travel abroad, make international connections, and experience life-changing events as they conduct research. Professor Goodrich was invited to apply for a Fulbright at the University of Sheffield by Dr. Nicky Hallett, a prominent scholar in her field at that institution.

Her successful application involved research for two projects: first, a book on early modern English Benedictine nuns’ textual production; second, a scholarly edition of texts by Benedictine nuns experiencing spiritual quarrels. As Professor Goodrich explained in a recent interview, her ten-month stay in England was very productive: “I examined manuscripts and early printed books at convents, monasteries, dioceses, research libraries, and even the Vatican. My travels took me through England, Belgium, France, and Italy.” Her research in these archives allowed Professor Goodrich to find a wealth of texts that were previously little known among scholars.

In the process, she gained new insight into the lives and writings of English nuns, making discoveries big and small. One of her favorite finds was a manuscript of alchemical recipes dated 1671, with a coded message that the Benedictine archivist had never taken the time to decode. Intrigued, Professor Goodrich soon realized it was a very simple substitution cipher that read, “I love Nanny Small. Olymphia Wray.” Wray professed at the convent in the late seventeenth century, and she probably brought this alchemical book—along with its expression of affection for her nurse—to the convent with her. Although this cipher did not make it into her book, Goodrich observed that “I always treasure these sorts of discoveries where you get a real sense of the humanity of people from the past.” As this anecdote demonstrates, archival research can offer charming glimpses into the past.

This archival research served as the foundation for Professor Goodrich’s book Writing Habits, which is the first in a new series at the University of Alabama Press (Strode Studies in Early Modern Literature and Culture). Writing Habits allowed her to combine philosophy and historicism as lenses for reading texts that have not been incorporated into the canon. Her book focuses on God’s relationship to the Benedictine convent and its members. She begins by drawing a comparison between how the late singer Prince and an early modern Benedictine abbess both expressed a similar view of God’s mysteriousness, using this example to show the modern relevance of nuns’ writings.

The book then takes a feminist approach by recovering the voices of Benedictine nuns who have largely been overlooked by scholars. Studying a wide variety of texts from obituaries to meditations, Professor Goodrich interweaves philosophical and historical readings of nuns’ writings to understand their unique communities. She ends the book by calling for “a movement toward feminist philosophy in early modern studies more broadly,” which would draw on the writings of women and other marginalized authors as sources for thinking about modern philosophical questions and dilemmas.

Writing Habits is only the latest chapter in Professor Goodrich’s ongoing efforts to recover the lost voices of early modern women and to demonstrate their relevance for modern times. Her work in this area began with a dissertation on political and religious translations made by Englishwomen between 1500 and 1640, which became the basis for an earlier book on another group of little-known women writers: female translators of the early modern period (Faithful Translators: Authorship, Gender, and Religion in Early Modern England, Northwestern University Press, 2014).

Professor Goodrich was inspired to work in this area by her desire to locate previously unknown or neglected voices: “I felt that it was important to continue the work of earlier feminist scholars by recovering these largely forgotten works and telling a different kind of story about what early modern Englishwomen wrote and how they lived.” Currently, she is working on two book-length editions of texts by and about early modern English nuns.