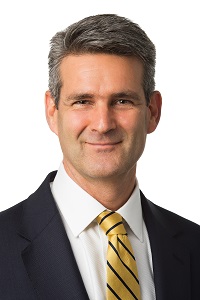 As an international student from Germany, Markus Krygier, CLAS '88, began his journey in the United States in pursuit of a master's in economics. Having heard the experiences of other exchange students who attended Wayne State University, his choice was easy. Wayne State had a good relationship with the University of Freiburg in Germany, where Krygier spent his undergraduate years, so he quickly applied and was selected for the exchange program.
"It was the opportunity to study in the United States in a focused graduate program, that excited me," Krygier said. Upon completion of his master's, Krygier returned to Germany, but Detroit always played a special role in his life. "The one year adventure abroad turned into much more, and I realized that I wanted to go back to the United States and further my studies." He returned to Wayne State and earned a Ph.D. in economics in 1998.
While still a student, Krygier even had the opportunity to be a teaching assistant. He fondly remembers the meaningful interactions with undergraduate students and the experience of teaching a subject with passion. From building communication skills to learning how to tell your personal story, Krygier notes teaching as one of the most positive memories at the university.
"During my Ph.D. studies I very quickly gravitated toward the intersection between international economics and financial markets," said Krygier. "I added a minor in finance at the business school and quickly realized that I wanted to take the skill set that I acquired at Wayne State to a practical application in financial markets."
Passion plays a significant role in Krygier's life. Fortunately, he could combine his professional passion for finance with his love of travel, which grew from his study abroad in Detroit.
"For the past 20 years in my professional life, I've been traveling extensively," Krygier said. "I have always enjoyed that part of my job. In part, that passion for traveling was triggered by my experience of leaving Europe for a while and moving to the United States, as well as getting to know people from all over the world."
After graduation, he worked as a bond analyst for a German bank, then moved to London to work in capital markets and portfolio management. As economist at the International Monetary Fund in Washington, DC he added public sector experience. Now, Krygier works in Washington, D.C., for Strategic Investment Group, an asset management firm that invests in global financial markets. As one of three Co-Chief Investment Officers overseeing all investments at the firm, Krygier works to invest funds for large domestic and international institutional investors. Most recently, Krygier has worked with investors to navigate their portfolios through the aftermath of Brexit, or the United Kingdom's vote to exit from the European Union.
Krygier's passion for his work in financial markets and investments is apparent when he speaks. When asked about advice to students, Krygier responded, "Find what you're passionate about, because only when you're passionate about something will you have enough drive and energy to become great at it."