Even before Hurricane Maria wreaked havoc on Puerto Rico in September 2017, Orlando Rios felt his opportunities to continue his undergraduate research at the University of Puerto Rico were limited due to budget cuts at the institution. In the weeks after Maria made landfall, he knew those chances were even slimmer.

A couple of weeks after the hurricane, Rios, 21, received a call from a friend that would change his life. Rios’ friend suggested he go online and Google research positions. In theory, it sounded easy. One problem: the internet wasn’t easily accessible.

“To Google something, I had to go more than 30 miles to the nearest town with internet access,” Rios said. “We mostly used data on our phones, so [online] traffic was really bad. But I still did it.”

The day after speaking with his friend, Rios woke up early to do chores, as he did every morning. They weren’t as routine anymore, since “not having water and electricity, it kind of takes a lot of time,” he said. Once finished, Rios told his mom he was going to go download some episodes of a TV show he enjoyed.

“The internet was really bad, so I couldn’t do any downloads, but I did get to go on Facebook,” Rios said. “I started to go over posts on the University of Puerto Rico’s faculty Facebook page. There was a post from the Ecological Society of America for Puerto Rican students that offered aid for research or temporary lab space. So I responded by calling this university I had never heard of before.”

At that same moment, nearly 2,000 miles away, Donna Kashian was at the doctor’s office with her daughter when her phone rang.

“For some reason, I knew that I had to drop everything and take the call,” said Kashian, associate professor in Wayne State’s Department of Biological Sciences. “The minute Orlando and I talked, we hit it off. He told me the situation about his university shutting down. I told him I was going to do whatever I could to bring him up.”

Rios spent the rest of that day talking back and forth with Kashian, working out how to make this happen. He didn’t end up getting back home until about a half hour before the island’s imposed 9 p.m. curfew. His mom had been worried about what took him so long to download his shows, unaware of her son’s big news.

“I looked at her and said, ‘Mom, I think I might be going to Detroit,’” Rios said. “Her immediate response was, ‘Detroit? What’s there?’ The vernacular idea of Detroit is that it might not be a secure city. I understood her immediate concern. She thought I was just going to go download some Netflix shows, not leave home. But I’ve been really independent since I was a kid. She did not present any resistance; it was just genuine concern. My dad, on the other hand, told me to go for it.” 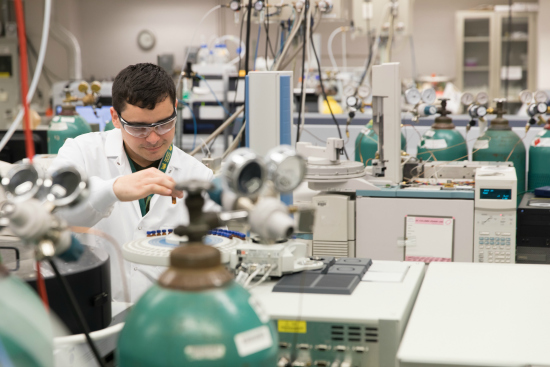 Getting Rios to Detroit was a joint effort between Kashian and Shirley Papuga, associate professor in Wayne State's Department of Environmental Science and Geology. Coincidentally, Papuga also was a recent transplant who came to the College of Liberal Arts and Sciences (CLAS) from the University of Arizona.

Papuga hired Rios on a pilot project funded through Wayne State’s Office of the Vice President for Research and Healthy Urban Waters — a collaboration of Wayne State researchers networked with the community to focus on water in an urban setting and future impacts of human culture on community, ecosystem and economic health.

Prior to the hurricane, Kashian had built a partnership with the University of Puerto Rico on the western side of the state through the grant. After Maria hit, she lost contact with colleagues at the university, and wouldn’t hear from them again until after Thanksgiving — they were all fine, but still dealing with challenges.

“We started posting everywhere we could — texts, emails, Twitter and Facebook — as I was getting concerned for their well-being,” Kashian said. “Shirley was the one who told me that the Ecological Society of America was delivering messages. I posted a note saying we had money to house a scientist in need and Orlando immediately responded. Orlando was from a different campus than our collaborators, but a person who could use help is a person who could use help, so we brought him up.”

Home away from home

By January, Rios permanently made the move to Detroit and enrolled at Wayne State. His goal is to finish his undergraduate degree in environmental science with a minor in geology before pursuing his master’s at Wayne State.

“He’s really integrated here and imposed this contagious, enthusiastic spirit of collegiality with his peers and faculty that we all could learn from,” said Papuga. “He is the kind of person who takes advantage of opportunities. We’re lucky to have him here because he adds so much.”

Rios is quick to express his gratitude for Kashian and Papuga’s work bringing him to Detroit.

“I just smile when I talk about these people. It feels surreal that I’ve gotten their help, support and time,” Rios said. “I have the best mentors ever in Donna and Shirley. The graduate students I work with in Donna’s lab and on Shirley’s team have been amazing to me. Everyone is so supportive and attentive.” One of those students is Anna Boegehold, a Ph.D. candidate in Kashian’s lab who studies aquatic ecology and invasive species. She was the first to meet Rios at the airport, picking him up and opening up her home for him.

“Anna is my best friend. She’s not only an excellent scientist, but she’s an excellent human being,” Rios said. “If I hadn’t met Anna, I don’t think I would’ve stayed. My mom always tells me to tell Anna that she’s so thankful for her presence in my life.”

Rios hit the ground running, immersing himself in research that involves studying volatile organic compounds (VOCs) on air quality to determine the vapor intrusion of the chemical compounds in metro Detroit basements. VOCs easily become harmful vapors or gases that can affect the health of those living in the homes.

“We’re going over sites that were historically vulnerable for these compounds and pollutants in the groundwater to see how they are intruding into basements. What is the social, economic and health impact to the people of Detroit?” Rios said. “Detroit is a city of research. There is so much going on.”

Papuga is impressed with Rios’ work ethic, drive, enthusiasm and willingness to push himself. “Research-wise, he just jumped in,” Papuga said. “Any task we put at him, he puts his whole self into it.”

Further helping Rios’ decision to stay at Wayne State was an inaugural $2,500 scholarship created by Mari Vaydik, senior director of philanthropy and alumni relations for CLAS. Vaydik established the Frank and Mary Ellen Vaydik Annual Scholarship in honor of her parents. Vaydik isn’t rich, but she still wanted to help students. Through a payroll deduction of $100 per paycheck, she created the scholarship, which is available to eligible CLAS students studying environmental science or English. Orlando shares what receiving a scholarship meant to him.

“My father studied economics at Wayne State, but his passion is the environment and environmental conservation. My mother was a journalism major and an English teacher,” Vaydik said. “I’m really excited that Orlando is the first recipient of this scholarship. He’s had a rough go of it and I cannot think of someone more deserving to receive this scholarship.”

“When I found out I got the scholarship, it reassured me,” Rios said. “Besides being thankful for the economic help, I want to thank (Mari) for her support because it means people believe in me. It’s an honor to receive it.”

Rios has adapted well to his new surroundings, including enduring one of Michigan’s coldest winters in recent memory. Rios said it’s been a love-hate relationship with the weather, especially since he prefers to bike to campus from his home in New Center. Overall, Rios can’t imagine being anywhere else.

“I fell in love with Detroit within the first month. Detroit is a city that is redeveloping. I wanted to be part of that redevelopment and change,” Rios said. “It’s an ideal place for me because I am transforming my life drastically, so I might as well do it in a place that is doing the same.”