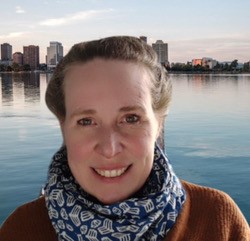 We have all seen bacteria growing on agar plates or in liquid media, but these are unusual situations. In the natural world, most bacteria live in biofilms, complex assemblies of microbial species in a protective, extracellular matrix – otherwise known as slime.

The stain in your shower and plaque on your teeth are biofilms. Biofilm formation on medical devices, such as catheters and artificial joints, poses a major health problem. Dr. Penelope Higgs studies how bacteria form these biofilm communities. She and her lab study the communal behavior of a fascinating bacteria called Myxococcus xanthus.

Dr. Higgs has received a Career Chair Award to investigate the global signaling pathways that coordinate the multicellular behavior needed by these bacteria to form a biofilm. Because bacteria in biofilms have a shocking level of antibiotic resistance, understanding how these biofilms form in the first place will be a major advance!