Moving towards a sustainable future in urban areas

In the heart of Wayne State’s campus, just outside the historical Linsell house, an interdisciplinary team of students is working on something groundbreaking – literally. The group is installing a bioswale — a cost-efficient landscape installation that allows urban neighborhoods to monitor groundwater flow and quality.

Bioswales work by capturing stormwater from impervious surfaces like roads. Then contaminants get removed as it filters through the sediment, so the water becomes less polluted before it enters the groundwater, sewer systems, or other bodies of water.

The bioswale project is comprised of four main components; groundwater well installation, designing and building the bioswale, sampling groundwater and soil for contaminants, and community engagement. There are wells at two sites, the Linsell House and an already existing rain garden at the Hamilton Rainscape Learning Lab in Detroit. 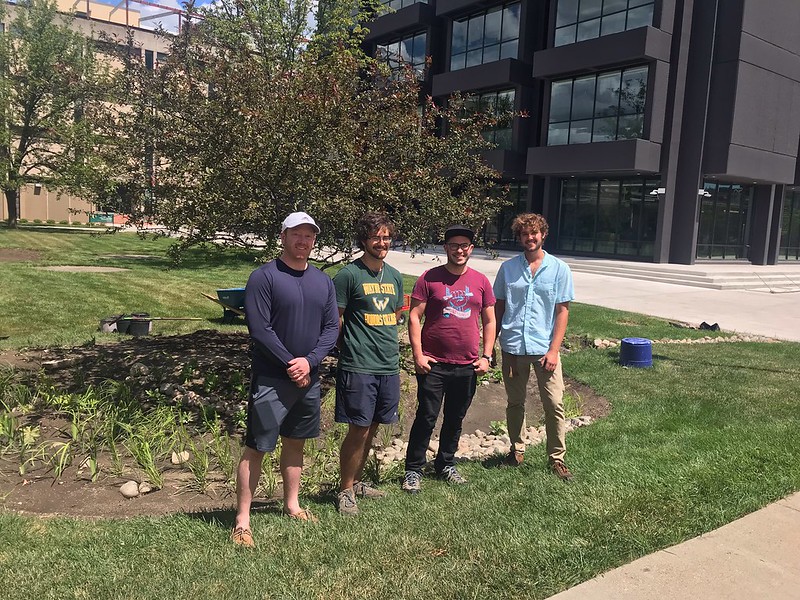 Biology Ph.D. candidate Brittanie Dabney is one of the students involved with the bioswale project. She hopes that the bioswale can serve as a research station where people can study a wide variety of topics related to green stormwater infrastructure and groundwater.

Dabney got involved with the project when she heard about the idea from College of Engineering graduate student Brendan O’Leary. Dabney explained that O’Leary’s original concept was to develop a collaborative groundwater monitoring project for the EPA P3 student design competition, where students collaborate to design solutions for a more sustainable future. O’Leary was part of the initial student grant writing team and has continued working on this project during its implementation.

The bioswale is a truly interdisciplinary project. Students from engineering, communications, biology, education and anthropology have collaborated on it.

Colleen Linn, a graduate student in anthropology, hopes to use the bioswale to open a conversation around the lived experience of water. She wants to learn from people who live near green stormwater infrastructure or have experienced flooding and their perceptions, understandings, and experiences of these events.

Linn explained that this understanding will help us to manage water problems with community-based expertise while elevating the topic of groundwater quality and quantity. This issue is a lesser discussed subject in a state that holds massive surface water resources.

“Groundwater is exceedingly important in the Great Lakes Basin. Urban groundwater supplies in cities like Detroit are important to document, in order to get a comprehensive sense of the total water resources available,” said Linn. “As we saw recently, water can become very personal and political in an instant — especially in the context of how we manage water at a neighborhood and city-level.”

Bioswales are beneficial to our environment and provide a safe habitat for birds, pollinators, and native plants. O’Leary said the eight groundwater monitoring wells, that are part of the original bioswale project as well, were designed to manage water in areas that are prone to floods. The wells help us understand how groundwater quality and quantity change due to increased infiltration from the bioswales.

“Water is directed to the bioswale during storm events, which will then infiltrate water into the groundwater. Most bioswales use deep-rooted native plants for increased infiltration and reduced maintenance,” said O’Leary.

There are multiple uses for bioswales in urban neighborhoods, such as protecting waterways from stormwater pollutants, reducing pollution in the surrounding environment, and reducing standing water.

Dabney explained that the bioswales on campus would have many benefits to the surrounding areas. “It will reduce standing water near Gullen Mall, lowering the potential of contaminant exposure and transport,” she said. “Another important benefit to the bioswale is that it will lower the volume of water entering our combined sewer system.”

The future of bioswales in urban cities is bright. According to O’Leary, the green stormwater infrastructure part of the Detroit Water and Sewage Department plans to invest $50 million by 2029. There is evidence that bioswales and other types of GSI can significantly impact cities when it comes to reduced flooding and contaminants in stormwater.

According to Dabney, bioswales could also contribute to the beautification of neighborhoods and improve the well-being of those living near bioswales.

“Bioswales are green spaces, and as cities become hotter, they will be useful in reducing heat stress and improving air quality in cities,” she said. “However, to have a big impact, I think cities will have to be serious about installing a network of vegetated bioswales.”

Bioswales are crucial to urban areas because they remove silt, heavy metals, and other prominent pollutants in urban cities due to their proximity to busy roads. Dabney believes that bioswales will continue to become more important to urban areas like Detroit in the future.

“I think the frequent flooding issues in Detroit and other major cities show that we need to do more to design and create effective drainage systems to deal with stormwater runoff in the future, said Dabney. “I’m certain bioswales will be a pivotal part of that plan.”